Not every dual cab ute is a status symbol. We road test three workhorses from the more affordable end of the market.

While Isuzu has just two models in its armoury – the D-Max ute and MU-X SUV – it punches above its weight in Australia. The dual-cab D-Max currently sits in fifth place for ute sales after the Ford Ranger, Toyota HiLux, Mitsubishi Triton and Holden Colorado and is particularly popular with the caravanning community for its robustness and no-frills attitude.

A big part of its success is a strong set of numbers, with the tried and proven 130kW/430Nm 3.0-litre turbo diesel engine headlining, matched to a six-speed auto, with a claimed fuel consumption figure of 7.9L/100km. A 3500kg towing capacity and 1029kg payload ensure it competes with the heavy hitters in the class and a six-year/150,000km warranty, six-year roadside assistance package and seven-year $350 capped price servicing schedule keep ownership costs in check. 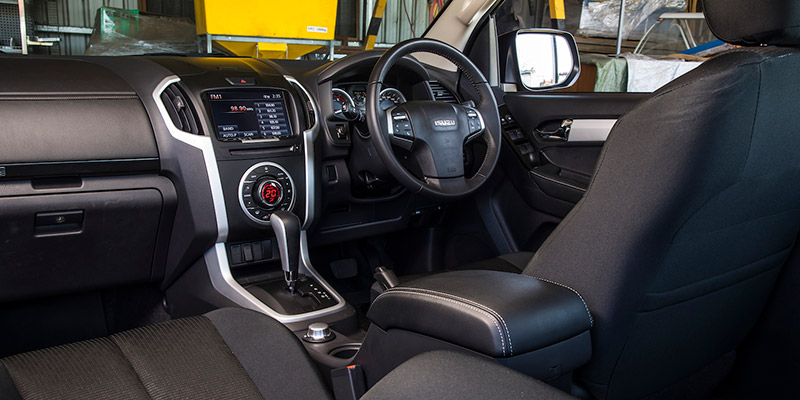 The model line-up consists of the SX ($43,400), the mid-range LS-U we tested ($48,800), and top-spec LS-T ($54,800). Standard features for the LS-U include climate control, 17-inch alloys, reversing camera and an eight-inch infotainment screen with sat nav. The interior is nicely finished and the controls are well placed, with front seat comfort just behind the Triton (best on test), but it lacks the contemporary design edge in the others.

From start-up, the engine is noisier than the Triton and SsangYong, and has that old school diesel clatter under load at highway speed. It still has plenty of grunt and the gearbox shifts smoothly, but it lacks the sharpness and refinement of the other two. Dynamically the D-Max feels cumbersome and moves around on its springs through corners, while protesting howls from tyres at their grip limits remind the driver of the D-Max’s weighty nature. A large turning circle and heavy steering with almost no feel don’t help matters. When the roads straighten, however, the D-Max feels more comfortable and relaxed.

While the Triton has been around a while, Mitsubishi hasn’t rested on its laurels and its biggest-selling vehicle recently benefitted from an exterior facelift and some minor mechanical upgrades. Our entry-level GLX test vehicle, priced at $39,990, is the classic workhorse, complete with durable vinyl flooring and 16-inch steel wheels. The range is extensive, encompassing 14-plus models, rounded out with the GLS Premium priced at $51,990.

Powering the Triton is Mitsubishi’s 2.4-litre turbo diesel engine, which debuted in 2015. With outputs of 133kW and 430Nm, it’s matched to a six-speed automatic transmission and delivers a claimed fuel consumption of 8.6L/100km. The base GLX’s list of standard features is meagre and owners will have to make do with a conventional key and manually-operated air conditioning. Cabin storage options include a good-sized glove box, centre console binnacle and door pockets. The Triton’s front seats are a standout – soft, yet supportive, and finished in a durable fabric. The rear seats are more upright and firmer (typical for the class), while foot space and leg room are down slightly compared to the roomier Musso. 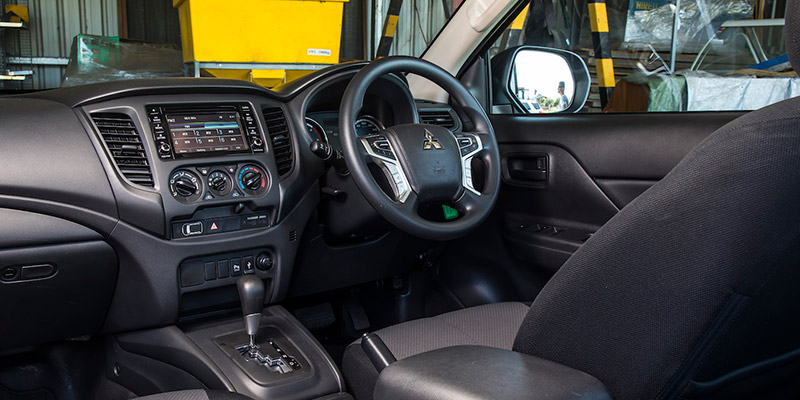 After undergoing some extensive re-engineering back in 2015, the Triton achieved a five-star ANCAP safety rating. An optional $3300 safety pack adds forward collision mitigation and pedestrian protection, lane departure warning, dusk-sensing headlights and rain-sensing wipers. The Triton’s towing capacity is rated at a more than respectable 3100kg. It does fall short of the 3500kg class leaders, but with as few as five per cent of buyers towing at the limits, it’s not a deal breaker. The rear tray is the smallest of the trio by just a few millimetres and the Triton’s max payload is 940kg. It has a five-year/100,000km warranty, and a three-year capped price servicing cost of $299.

Mitsubishi’s 2.4-litre turbo diesel engine has long been a willing performer and now more so than ever thanks to the six-speed auto. The extra gear makes it feel more relaxed and refined, using the low-down torque instead of engine revs. While the Triton in base form feels less noisy out on the highway, it’s a toss-up between it and the Musso for which is quietest. The chassis is well sorted and, when unladen, the Triton’s ride quality is the most agreeable of the three – a touch softer than the Musso’s and with better body control than the spongy D-Max. The steering is light and its smaller turning circle is a definite plus around town.

The ELX auto is the entry point in the range with a recommended drive away price of $41,990, rising to $43,990 for the Ultimate Plus. The range includes standard and long wheelbase variants and our test vehicle was the long wheelbase version, which uses conventional leaf spring rear suspension enabling a higher payload of 1025kg, compared to 820kg for the short versions. Rated towing is 3500kg and the tray for the long wheelbase model is comfortably the biggest of the trio.

The standard features list is excellent for an entry-level model. Highlights are keyless entry, button start/stop, a tilt and reach steering column, auto headlights with daytime running lights, seven-inch infotainment display with Apple CarPlay and Android Auto, and a USB port. A four-cylinder 2.2-litre turbo diesel powers the Musso, developing 133kW and 420Nm from 1400-2800rpm. Matched to a six-speed automatic, it has claimed fuel consumption of 8.9L/100km. Safety features include autonomous emergency braking, lane departure warning, front collision warning, high beam assistance, and a reversing camera. The Musso’s big problem, though, is its lack of an ANCAP safety rating, which takes it off the table for many commercial fleet buyers. 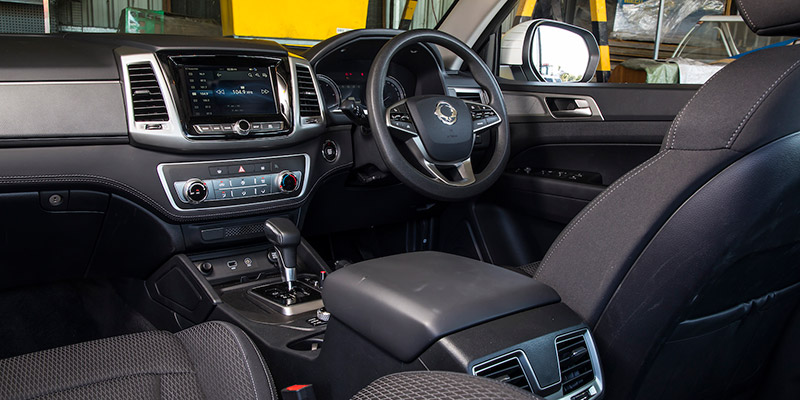 On-road the Musso turned out to be the surprise package of the trio, with impressive overall refinement. It doesn’t have the low-down grunty feel of the D-Max, but it’s streets ahead in smoothness and quietness, and the six-speed auto is quick shifting when you need to accelerate. Despite having the longest wheelbase, the Musso’s 12.2-metre turning circle sits between the Triton’s 11.8 metres and the D-Max’s 12.6 metres, and it’s more adept in tight spaces than its ample dimensions suggest, rivalling the Triton for manoeuvrability (the D-Max feels like a light truck in comparison). The Musso matches the Triton’s confidence through corners and its steering is nicely weighted and much better than the D-Max’s. With no load in the rear the Musso ride’s quality remains good, if a little on the firm side compared to the Triton.

While a new model is on the horizon, the Isuzu D-Max is showing its age and will have to soldier on against some stiff competition. This includes the Musso, which will be a serious contender if SsangYong can achieve the necessary five-star ANCAP safety rating and follow through on the rumoured Aussie engineering going into the suspension tune in the near future. It may be the ugly duckling, but pragmatic buyers will see value in its other attributes. This leaves the Triton, which Mitsubishi has continued to quietly develop and refine. It didn’t get to be the third-biggest seller in the segment by accident and it’s undoubtedly the pick of the bunch in this comparison.

NRMA provides car loans to get you on the road faster 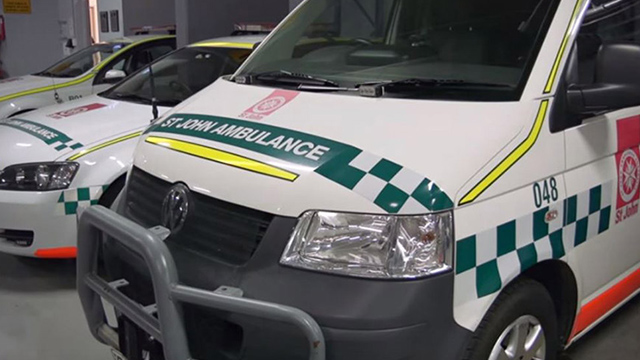