Seasoned motoring pundits have lost a lot of sleep over the years trying to figure out why utes have become so popular. It was only a decade ago when a ute’s main brief was to lug tradies and their gear to worksites or to tow a trailer.

While those functions remain, five-star ANCAP safety ratings, more standard features and better overall presentation have smoothed out the rough edges. Improved automatic transmissions with a greater number of ratios have aided driveability and few other vehicles can tow up to 3500kg.

While the new market for 2018 didn’t reach the sales heights of the previous year, light commercials and dual cab utes continued to sell strongly, defying the downward trends in other categories. Dual cab utes topped the sales charts, with the Toyota HiLux and Ford Ranger repeating their 2017 one and two podium finish.

The basic packaging of these two big sellers remains unchanged, with little difference between tray size, towing capacity or payload. However, even with more and more ‘luxo’ dual cab utes on our roads, the Toyota HiLux Rogue and Ford Ranger Wildtrak are still among the best examples around. 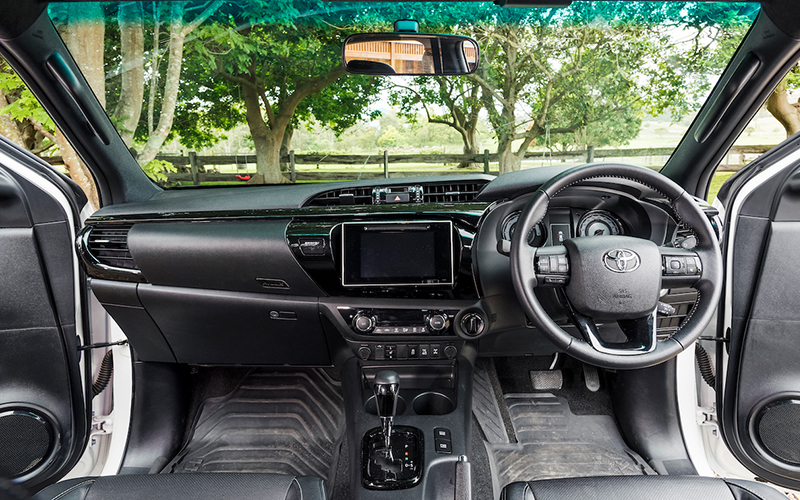 One of the trio of new variants Toyota introduced last year, the Rogue joins the Rugged and Rugged X as range-toppers for the line-up. Toyota executives claim the new models are more than just a simple makeover or a raiding of the accessories bin.

The new models were developed over a three-year period in collaboration with Toyota Australia, Toyota Japan and Toyota Thailand (where HiLuxes are built for our market).

The Rogue endeavours to be the most stylish of the range and the exterior redesign reflects more of Toyota’s current global truck design DNA. The changes include a larger front grille and redesigned front bumper, creating more width and ‘chunkiness’. The result is a stronger visual presence, something the older models lack.

Exterior trim is finished in black or grey, and the large Toyota logo on the tailgate – a feature of the HiLux for as long as I can remember – is no more, replaced by a more discreet badge in the upper corner. A lockable fibreglass decklid, black sports bar and 18-inch black alloys finish the exterior. The interior also gets the black treatment across its leather seats, headlining and trim detailing.

Mechanically the Rogue remains unchanged with the 2.8-litre turbocharged four-cylinder developing 130kW and 450Nm when matched to the six-speed automatic. With maximum torque from a low 1600rpm, it’s a pretty handy piece of kit, and has much lower noise, vibration and harshness (NVH) levels than the old 3.0-litre diesel. Its performance isn’t blunted too much when there’s a reasonable payload in the tray. On test, the Rogue returned 9.1L/100km, not far off the official claimed combined figure of 8.5L/100km.

It has hydraulically operated rack and pinion power steering and a largish 12.6-metre turning circle. The Rogue has 215mm of ground clearance and is fitted with 265/60 18-inch tyres for a sportier low-profile look, whereas the Rugged and Rugged X are fitted with 265/65 17-inch tyres that are better suited to off-road conditions.

Priced at $61,690, it includes a standard features list that’s lifted from the SR5 version, but adds heated front seats with eight-way adjustment, a redesigned instrument cluster and a 4.2-inch driver display. To reflect the Rogue’s premium positioning, its rear tub liner has a soft foam base and is finished in water resistant marine grade carpet. 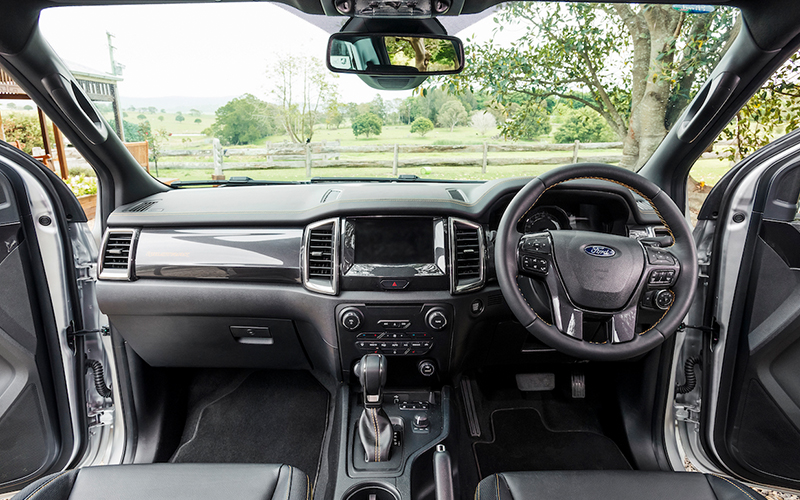 The Ford Ranger’s recent upgrade has been more extensive than the HiLux’s makeover. New powertrains, improved suspension, improved safety packages and reduced ownership costs underpin this latest version. With so many Rangers on the road sporting aftermarket grilles and flare kits, it can be hard to tell the difference between models from front on, but the Wildtrak features a new grille, high-intensity discharge (HID) headlamps and daytime running lights. Like the recently upgraded Ford Everest, which shares the same mechanicals, the Ranger’s suspension has been revised and the front stabiliser bar has been repositioned to improve body roll and control through corners.

The Wildtrak is powered by the tried and proven 147kW/470Nm 3.2-litre V5, with the $1200 optional 2.0-litre twin turbo not available at the time of review. The big engine is a well-credentialed package matched to a six-speed auto, and maximum torque is developed from 1750rpm. A recent drive in the Everest with both engine variants didn’t reveal much difference in overall driveability between the pair. The 3.2-litre’s maximum torque, over a slightly wider rpm band, seems to negate the 2.0-litre’s extra 30Nm. The larger capacity engine has plenty of fans out there in towing land and feels stronger off the mark when compared to the Rogue, and has less mechanical clatter accelerating up to 100km/h. On test, it returned 10L/100km from a claimed 8.4L/100km.

The Wildtrak is priced at $62,790 and shades the HiLux with features like autonomous emergency braking (with vehicle detection and pedestrian protection), adaptive cruise control, semi-auto parking assistance (parallel), power lock tailgate, lane keeping assistance and auto high beam. Ford’s SYNC 3 system is displayed via an eight-inch touchscreen and has voice activation for settings such as climate control, with the latest system much better at picking up commands on the first try.

The Wildtrak leaps ahead of the Rogue with better ride quality, and the suspension is more compliant, soaking up irregularities instead of bouncing over them. The Wildtrak’s steering is lighter and more communicative, making it better at low speeds when parking in tighter spaces. In fact, the tyre spec for the Rogue is the same as the HiLux SR5 (a former Australia’s Best Cars Dual Cab Ute category winner) and it came as a surprise just how firm the ride was.

Without any load in the tray, the Rogue picked up minor surface irregularities, delivering a jiggly ride that became tiresome after even a short time behind the wheel. The steering weight was also on the heavy side and more assistance would be welcome, especially considering the number of dual cab utes used as family transport these days.

The Wildtrak features a cassette style roll-up tonneau cover, which can be slid back to open up the tray completely and allow for oversized loads. The HiLux’s hard cover, whilst undoubtedly strong, hinges at the front of the tray and limits its ability to carry anything bulky unless you remove the lid first. 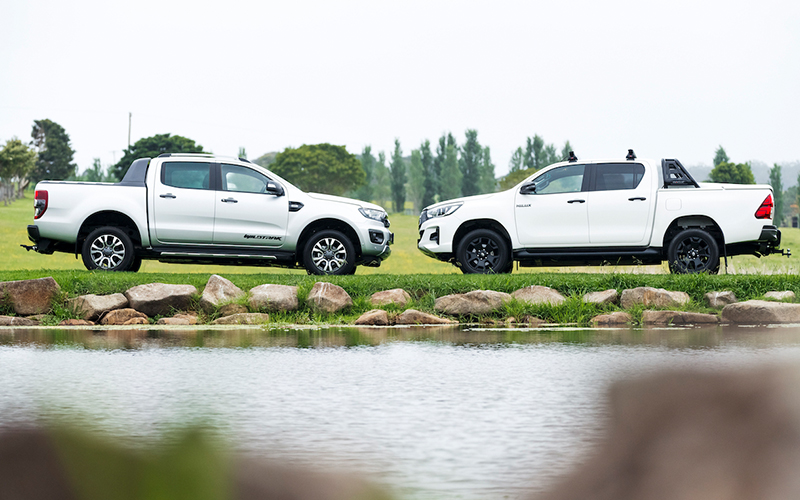 As drivers we’re largely city centric, so we tend to forget that these utes are based on a rugged chassis designed to go off-road, where a dusty or muddy ‘goat track’ is more common than a strip of bitumen. These are driving situations that many of us will never encounter.

In those scenarios, the Ranger Wildtrak and HiLux Rogue are really only limited by the experience of the driver and, in the right hands, both will navigate just about any situation and come out the other side intact.

Dual cab utes have sat in a market segment where vehicles barely change from one year to the next. The recent upgrades to the Ranger and increased variant line-up for the HiLux shouldn’t come as much of a surprise as they highlight how seriously the manufacturers value the mantle of being number one.

While the HiLux takes that title, the Ranger wins out in driveability and overall user-friendliness. With the competition offering up more sophisticated models every year, how long the HiLux continues to sit up top is anyone’s guess.

NRMA provides car loans to get you on the road faster