For many people contemplating buying a luxury car, this category is the entry point into a prestigious marque. As such, we have a relatively small but highly competitive field of premium-grade compact cars.

This year BMW's 118i Sport Line 5dr hatch has edged ahead of the pack with a mid-cycle upgrade that restructured the 1 Series line-up, smartened the presentation and improved the standard features. Hot on its heels is the updated Volvo V40 T4 Luxury, while third is the all-new BMW 218i Active Tourer Sport Line, a very different vehicle from the 118i.

The 1 Series follows BMW's traditional, beautifully balanced driveline configuration with a front-mounted longitudinal engine, mid-ship transmission and notably, in a class dominated by front-wheel-drive models, a rear-wheel-drive set-up. The 118i Sport Line 5dr replaces the 116i from last year as the top-selling 1 Series. Along with subtle interior refinements, features such as a rear-view camera, BMW's savvy ConnectedDrive with real-time traffic information and rain-sensing wipers are now standard across the range. Like most other cars in this class, there are also plenty of extra-cost options available to dress it further if you want.

There is a touch of understated sporting elegance and refinement about the 118i, both in the way it looks and how it drives. The refreshed styling and presentation is smart; BMW uses high-quality materials and there is a pleasing attention to detail in the trim and interior fittings. Continuing the slightly sporting character, the 118i has a cockpit-style cabin layout that is a little tighter on space than some of its rivals. It is cosy rather than cramped, and appropriately contoured seats provide good comfort and support.

The 118i hatch is a superb everyday drive. Sharp, nimble handling, good steering feel and excellent cornering grip are backed up by a well-controlled ride that is firm but certainly not harsh, making it an involving and enjoyable driver's car under all conditions.

The car is propelled by a sweet 1.6L, 4cyl turbo-charged petrol engine that produces a useful 100kW of power, while its 220Nm of torque, developed from 1500rpm to 4500rpm, provides plenty of flexibility. It delivers ample performance for a relaxed driving experience, and there's enough in reserve for a swift response when required.

Having a well-matched 8spd automatic transmission helps keep the 118i's engine working in its most effective range, and as such fuel consumption is relatively low. In fact, it's one of the more fuel-efficient petrol models in the class, however it still lags slightly behind the hybrid models.

A point worth noting is that BMW will be progressively phasing in a 1.5L turbo engine, which is also matched with the excellent 8spd automatic. This engine produces the same power and torque as the 1.6L version, and BMW claims the acceleration times are similar. The big plus is that, according to the official figures, this engine uses less fuel and delivers lower emissions.

The 118i Sport Line 5dr hatch provides the prestige small car buyer with a high-quality, well-rounded package for everyday use. 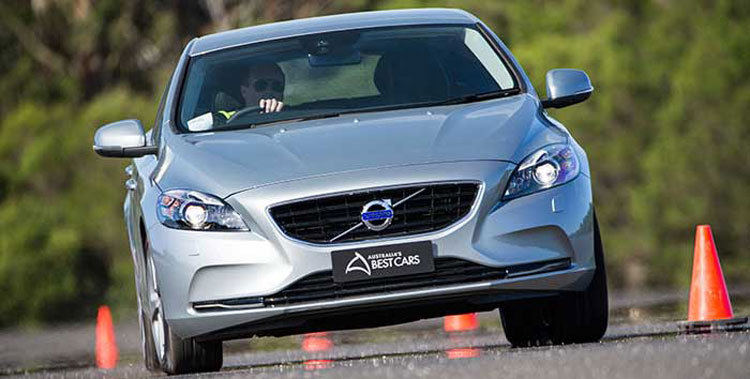 The Volvo V40 T4 Luxury 5dr hatch has been a solid contender in this category for a couple of years, but a recent update, featuring a more efficient engine, has been a big plus.

Improved drivability along with significantly better fuel consumption and lower emissions are key elements of the T4's improvements. The 2.0L 4cyl Drive-E petrol engine delivers slightly more power than the 5cyl engine it replaced. While the maximum torque is the same, with a handy 300Nm, it is now delivered a lot lower in the rev range and maintained longer for strong pulling and greater flexibility, which is ideal for everyday driving.

Safety is a Volvo strength and the V40 maintains the standard. While the updated petrol model has not yet been rated by ANCAP, the V40 D2 (diesel) variant achieved an impressive five-star rating, including a good pedestrian safety score. Along with the usual standard safety kit most cars in this class provide, the V40 has excellent active safety features including Volvo's City Safe (autonomous braking) system, active bending lights that follow the steering direction, and a roll-over protection system.

Vision blind spots caused by the thick front pillars detract from what is otherwise a comfortable, generously equipped, easy-to-use and well-presented cabin layout. 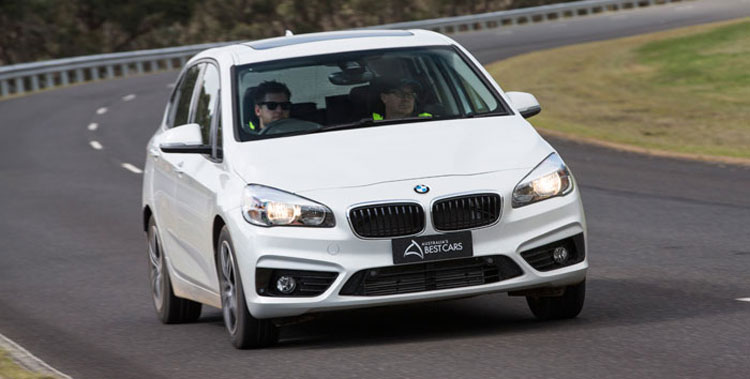 BMW breaks its traditional mould and targets a slightly different segment of the premium small car audience with the 218i Active Tourer.

To start with, it's the first mainstream BMW to be front-wheel-drive, which translates into a more efficient use of cabin space. Together with the 5dr hatchback's tall body design and elevated seating position, it creates an almost mini-people mover feel, making the Active Tourer one of the roomiest cars in the class. All the controls are familiar and conveniently placed.

The 218i's fortes are its comfort and a generous standard features list, because dynamically it lags just a touch behind our other two finalists - it's very competent rather than exhilarating to drive. With its well-proven 3cyl turbo-petrol engine and front-wheel-drive configuration similar to that in the MINI range, it provides a reassuring level of confidence in BMW's change of direction. The 218i version's on-road ability suits the car's more conservative style. As with other models in this class, there are more powerful versions for those who seek performance.

The Active Tourer just missed out on a five-star ANCAP rating, but our safety score recognises the inclusion of a number of important safety assist technologies designed to help prevent collisions or at least minimise the effect of those it can't.

Did you know buying a lemon could cost you thousands?

A car history report can help you avoid costly pitfalls