It wasn't so long ago that your choice of large car depended on which camp you rallied for each weekend at the V8 Supercars. Holden Commodore and Ford Falcon dominated not only the segment but the market as well. The big Aussie 6cyl sedan was the performance, family and executive car rolled into one.

Fast-forward a decade and the large car class is now a multicultural affair, with representation from Korea, Japan, the US and even France.

Buyers are more spoilt for choice than ever before, despite the shrinking size of the segment due to the seemingly never-ending popularity of SUVs.

Launched in 2014, Hyundai Genesis has found favour with hire car companies and hotel chains, with a smattering of private buyers thrown in. While it may seem odd to find a 'limousine' in this category, Genesis comes with a bargain price-tag which saw it easily fit into a segment that cuts off any cars over $70,000.

After almost taking the honours from Holden Commodore last year, the Korean-built Genesis this time around produced what matters most in this class. It outscored Commodore and the recently-upgraded Lexus ES 300h in seven criteria, with considerably higher scores for running and repair costs, warranty and dealer access. On top of its outstanding five-year/unlimited-km warranty, Genesis also comes with lifetime capped-price servicing.

Genesis also ranked the highest of all cars in the critical area of safety. At the time of writing, it held the highest safety score recorded by ANCAP - 36.88 out of 37. That is no small feat when you consider the plethora of newer models launched in 2015. Standard safety equipment on the Genesis includes seven airbags, autonomous emergency braking and a pop-up bonnet to provide extra protection from injury for pedestrians.

Genesis also topped the class for seating comfort, with 12-way powered, heated seats for driver and front passenger as standard across the range. The judges noted the good bolstering and under-thigh support.

On the road, Genesis also led the category, the judges commending its considerable ride comfort as well as class-leading scores for smoothness/ quietness and braking.

The 3.8L V6 petrol engine is combined with an 8spd automatic which together translate to a smooth, refined drive. While not the best handler in the class, Genesis certainly doesn't disgrace considering it tips the scales a touch under two tonnes. The Genesis is also not a small car, measuring almost 5m in length. And it was one of the first of a batch of new Hyundai models to benefit from extensive local suspension tuning.

Hyundai pitches Genesis against the Euro luxury trio of BMW 5 Series, Mercedes-Benz E-Class and Audi A6, so it's not surprising that this car has an equal class-topping score for build and finish.

The one area where Genesis struggles to compete is fuel consumption. The only car in the class with a higher fuel figure was Holden Caprice, which sports a 6.2L V8, and rivals with similar-sized engines to Genesis's V6 are far more frugal.

Despite a Series 2 refresh, the SV6 was unable to make it a hat-trick of wins in Australia's Best Cars.

If you hadn't noticed there was a new Commodore, you're forgiven, as the Series 2 was centred on the V8 models and the SV6 only received a few minor upgrades including keyless entry and start, a different 18-inch alloy wheel and a new front fascia and grille.

Yet with new models such as Lexus ES 300h entering the class, the VF Commodore SV6 still held its own, even though the VF is now almost three years old.

Since its launch in 2013, the VF Commodore has always been a good handler and nothing this time changed the judges' position. The rear-drive SV6 has responsive steering and is agile for such a large car.

The trade-off, however, is that ride comfort is not as good as some of the rivals.

The SV6 also topped the class in the important criterion of depreciation.

With a hybrid and a couple of diesels in this class, the Holden's fuel consumption score was never going to be pretty but it could still boast a very good environment score, and of course there's all that lovely Australian family car space. 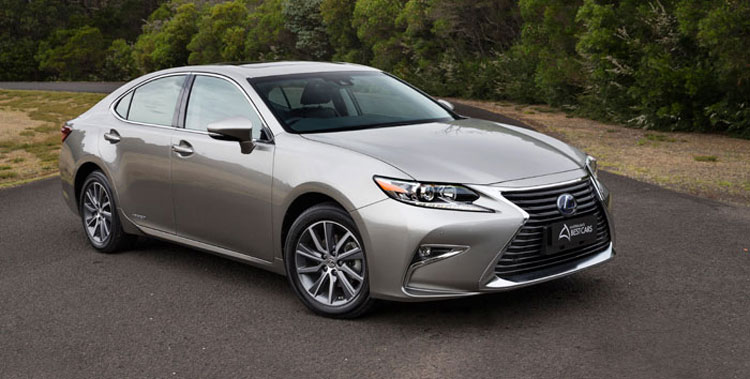 This all-new model jumped onto the podium after receiving an upgrade in September 2015. Lexus improved styling, revised the interior fit and finish, added some new options and improved standard safety equipment.

The cabin received a number of detail changes including new controls, as well as three new trim colours with contrasting stitching.

The petrol/electric hybrid drivetrain scored a perfect 10 for environment and was equal top with Peugeot 508 for fuel consumption, an outstanding result given the Peugeot is a diesel.

On the road, the ES is a little off the pace compared with the other placegetters. The electric motor and a very good CVT transmission take care of initial take-off. Overall it's no dynamo; it's all about sitting comfortably and enjoying the drive.

A used car can come with loads of problems