A bigger, more refined new Sorento has broken Hyundai's three-year winning streak in this hotly contested category after being a finalist itself during the Hyundai hat-trick. It's a just reward for a manufacturer which takes careful heed of what the market wants.

One of the biggest improvements made to the new Sorento is in its refinement. KIA has clearly worked hard to reduce road and engine noise, with new soundproofing added to the transmission tunnel and thicker soundproofing inside the dashboard. The improvement was certainly noticeable, and this was one of the areas where Sorento edged ahead of Hyundai Santa Fe.

The other winning area for Sorento was its running and repair costs, where it finished one point ahead of both Santa Fe and the third-placed Land Rover Discovery Sport.

While the Disco is undoubtedly an excellent vehicle, it did lose points due to its higher price.

The new Sorento is based on the same platform as the current KIA Carnival people mover, not the older Santa Fe from its Hyundai cousin with which it has historically shared many engineering fundamentals. This means its underpinnings are a later design than those of the current Santa Fe. So for now, these two Korean SUVs are no longer twins under the skin.

That makes the Platinum variant $4500 more expensive than previously, but you're also getting a lot more car. It's longer and wider than the last Sorento, and its aforementioned refinement and premium build and finish add to the feeling of luxury.

The interior is well appointed, with seven seats as standard. Leg room in the rearmost seats is excellent and there are even ventilation controls for occupants in that third row, neither of which can be said of all its competitors.

Drivetrain options for the Sorento remain similar to before. A 3.3L, 199kW and 318Nm petrol V6 engine replaces the old 3.5L V6, while the Platinum's 2.2L diesel is the same size as before but now punches out 147kW and 441Nm - slightly more than the previous model.

The new Sorento also gets improved safety kit, including a rear-view camera as standard across the range. All model grades also get six airbags (including curtains all the way to the third row), hill start assist and brake assist. There are also seatbelt reminders for all seats. Additional safety systems on the Platinum include lane departure warning, active cruise control, blind-spot detection and rear cross-traffic alert. Autonomous emergency braking isn't available though. Sorento has a five-star ANCAP safety rating, although overall it is outpointed in this critical area by the two minor place-getters.

With its increased size, refinement, equipment and powerful but efficient turbo-diesel, it's no wonder the Platinum is the most popular Sorento. Its long-awaited win in Australia's Best Cars is well deserved. 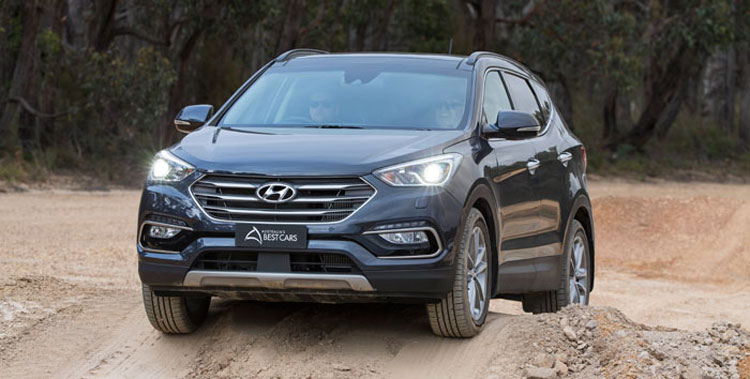 Although the Hyundai Santa Fe was pipped at the post by its Korean cousin this year, it still thoroughly deserves to be near the front of the pack.

At more than $60,000 drive-away, this top-of-the-range Highlander model requires a sizable outlay, but the raft of new equipment on this Series II makes it one of the best-value SUVs. Exterior and interior styling has also been sharpened.

Auto parking was standard on the previous Highlander spec but only for parallel parking - the Series II can now also assist with 90-degree reverse parking. Hence the Hyundai has a class-high standard features score.

The judges noted the Santa Fe's diesel was a little noisier than that of the Sorento, although the Santa Fe did make up some ground in depreciation despite its similar purchase price.

Most other scoring areas, such as handling, ride, performance and seating comfort, were lined up with those of the Sorento, indicating the closeness of the pair, which for many years were clones of each other. A replacement for the Freelander, the Discovery Sport was a long-overdue update to the British marque's line-up.

The Disco Sport's interior is a beautiful place to be and its quietness will have you basking in its serenity.

It drives well on the road, and given it's wearing a Land Rover badge it also has to be better than average off the bitumen. Land Rover's now-renowned Terrain Response programmable off-road modes have seen to that.

Its 2.2L diesel is also best in class for smoothness and quietness, and it's more frugal than the same-sized engines in Sorento and Santa Fe.

With all that good news, there has to be some bad. And that includes the price, which is well above average for the category, and the vehicle's depreciation score also takes a hit.

The cost of spare parts affected running and repair costs, as did dealer access.

The Landy's three-year warranty also got nowhere near those of the KIA and Hyundai, which are covered for seven and five years respectively.

NRMA car loans can help make that dream a reality