For several years, Kia has led various segments of the market for value for money, and the value it's packed into the upgraded Optima has helped it beat all comers this year. Besides the value proposition, Optima's design and engineering have come of age and it can now genuinely be compared with the high-end Japanese makes.

Kias aren't normally known for their performance, ride and handling, but they have got it pretty well right in the Optima. The combination of the turbo-petrol engine and the in-house designed and built six-speed auto are the foundation of the performance package. Add an industry-leading seven-year transferable warranty and Optima is very hard to beat in a class where the buyer is particular about what they're getting for their money.

The Kia Optima GT's class-leading list of standard features is one of the reasons it will be the volume seller of the range. Kia believes it has matured as a brand to the extent it now wants to be seen as more up-market. Given it's the most expensive car in the class, it's got to get the quality right. And the most important step to this goal is state-of-the-art technology.

The place where Kia has started is safety. The entire Optima range has active cruise control, which automatically adjusts the vehicle's speed to maintain a safe distance from vehicles in front. There's also lane-departure warning, high-beam assist (which automatically adjusts headlight range according to other vehicles and road conditions) and autonomous emergency braking. The GT gets more safety kit with blind-spot detection and rear-cross traffic alert, a system which warns of other vehicles driving behind you when reversing in carparks.

Other features such as leather trim with contrasting stitching, satellite navigation with traffic information and a wireless Android phone charger built into the console complete the premium feel in the GT.

The Optima's interior displays a sense of space, and there's good front and rear head and leg room. A wider opening allows access to quite a spacious boot, even with a full-sized spare wheel in the cargo area.

Seat comfort is looked after with heated and fan-cooled leather front seats. They are also well bolstered and supportive in keeping with the GT theme. The heated, flat-bottomed steering wheel houses a myriad of control switches, and tucked behind it are gearshift paddles.

The new 2.0-litre turbo-charged direct-injection petrol engine is powerful, and it has the equal-best score in the class in performance, yet it still does well on the environment front, with a four-star rating despite fuel consumption that is only ranked as average.

The other area of noticeable improvement is in the sound and vibration experienced in the cabin. Quietness is again an element of the premium feel, and it is here where a lot of Kia's research and development dollars have been spent to get it right.

The refresh of the Optima has made it not only good value in the under-$50,000 market segment, but it's now a seriously stylish car that can take it up to the premium Japanese brands. 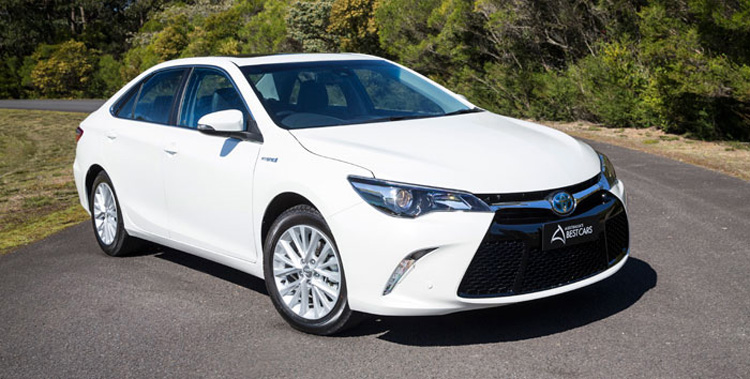 The Toyota Camry recipe of good value, cheapness to run and solid engineering has stood the test of time. Although Camry has never been a styling icon, it has had the attraction of fuel-saving hybrid technologies that have been around long enough for buyers to feel comfortable that hybrid cars are well and truly out of the "laboratory experiment" stage and embedded in mainstream motoring.

The Atara SL is the top of the Camry range, and so its value-for-money proposition is a mixed bag, with excellent running and repair costs but only average price, warranty and insurance scores.

And although it has a lot of the desirable features such as satellite navigation with a traffic monitoring service, a premium audio system and leather-accented seats, it was a little off the function and performance pace compared with the other two finalists.

This will be the last Australian-built Camry, so it is a bit of a swansong for it in some ways, but nevertheless it's a worthy runner-up this year. 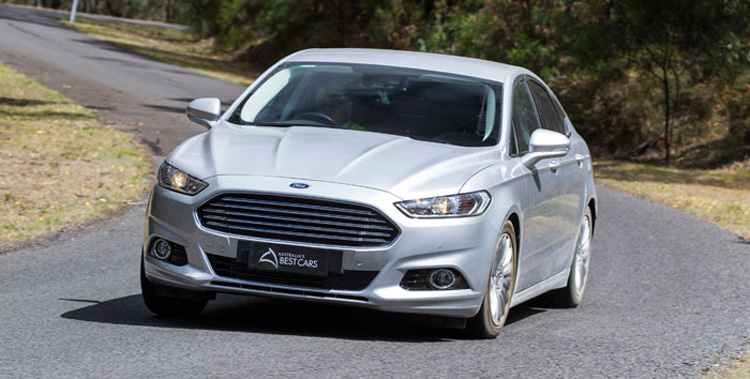 Touted as the replacement for the Falcon, the new-generation Ford Mondeo hatch may be slightly smaller than Falcon on the outside but inside it has large-car space, and if you need even more of that there's a wagon version.

The volume-selling Trend variant is mid-range model in the three-car Mondeo line-up. It was the cheapest of the three finalists but its lower price came at the cost of fewer standard features than the KIA. But it does boast the ubiquitous Ford SYNC 2 system that allows the driver to control their phone, music and climate control by voice.

The stand-out element of Mondeo's on-road performance was the drivability of the 2.0-litre turbo-petrol engine. It is a great powerplant that is used in a lot of other Ford product, including the EcoBoost Falcon. And its combination of ride, handling and braking was equal to the class-winning Kia Optima.

Besides the normal suite of nine airbags that all Mondeos have, the Trend version includes additional active safety systems such as pre-collision assist with pedestrian detection, lane keeping aid, lane-departure warning and a rear-view camera.

If it's going to replace Falcon, then Mondeo must play to that car's strengths, and Ford fans needn't despair on that front. And note, only a hybrid beat its environment score.

A car history report can save you thousands

Did you know almost 25% of used cars hide a potential problem?