According to Subaru managing director, Colin Christie, it's the most important model launch in the brand's history. The fifth generation of Subaru's iconic Impreza sedan and hatch is officially on sale and if the above statement is anything to go by, it's got to be good. Really good. The Impreza is Subaru's 'bread and butter' car – the volume seller in its range.

The Impreza competes in the small car class against popular models such as the Volkswagen Golf, Mazda3, all-new Holden Astra, Toyota Corolla, Hyundai i30, Kia Cerato and Honda Civic.

While sales in this segment are declining as buyers flock to SUVs, the small car market is still a high volume area.

Subaru is changing tack for this model?

In a bid to further tap into the youth market, Subaru has decided to sell the Impreza via a 'click and collect' style option. Like the BRZ, the Impreza can be built and paid for online and the buyer goes to the dealer of their choice to pick the car up when it's ready. Subaru says about 20 per cent of buyers opted to purchase their BRZ online.

While many of us can't fathom buying a car without driving it, Subaru says 700 people have already placed their orders for the new model without test driving one.

Pricing starts from $22,490 plus on road costs for the base 2.0i sedan ($22,600 for the hatch). The sedan is the same price as the equivalent Mazda3 Neo sedan and $350 cheaper than the entry level Golf, despite the Impreza featuring all-wheel-drive standard across the range.

It should be noted servicing costs are cheaper with the new model as Subaru has moved from a six-monthly service schedule to a 12,500km, annual capped price servicing plan (three year/37,500km), which it says "removes a major obstacle" for customers. In the first three years, the total cost of servicing is $1298.19, $918.86 less than the superseded model.

How different is it from the old model?

According to Subaru, the new Impreza is 95 per cent new and built on the all-new Subaru Global Platform. This Impreza is 10mm lower and 35mm wider than the superseded car and the wheelbase has increased by 25mm.

Improvements have been made throughout the car to reduce noise and vibrations, such as more insulation, different sound-absorbing materials and stronger components.

The Impreza features a newly developed engine that is more aerodynamic, lighter, lower and more efficient. The continuously variable transmission is lighter, feels sportier and has less vibration and noise.

While it may not look that different to the previous model, the new car has had a number of styling changes, including a redesigned grille, headlights, dynamic style lines that run the length of the doors for a more sculptured profile, differently positioned rear lights and new fog light inserts.

But it is not just about looks, as many design tweaks improve aerodynamics and aid fuel efficiency, sportier driving and stability. The Impreza's bumper, for example, provides better pedestrian protection and safety in minor collisions and the new aluminium bonnet saves approximately 5.2kg. The windscreen wiper blades are now flat and have a thinner profile to help visibility.

Thicker outer door panels increase rigidity and also improve the sound of doors closing and provide a solid feel. The glass thickness has increased and the cross-section of sealing parts has changed to reduce noise levels. The new door mirrors and front pillar covers improve aerodynamics and reduce noise.

There is now an auto open/close function is for the driver and front passenger windows and, in a first for Subaru, the windows have a speed control function, with the window rise slowing slightly before fully closing.

The previously shelf-mounted brake light for the sedan is now located at the upper edge of the rear screen for better styling and visibility. It sits flush against the glass, preventing light seeping into the cabin. The rear bumper and spoiler aid aerodynamic performance and fuel efficiency.

The airflow of the centre and side air-con vents has been improved, while the new unit is quieter and performs better. More outlet modes offer better temperature regulation. In the 2.0i-L, Premium and S models, the air con can be controlled by voice recognition.

The seats are redesigned for better safety and comfort. Increased sliding adjustment allows for more driving positions and the thinner front seats have better cushioning while also increasing room in the rear.

The seats are more supportive, while better side bolstering helps maintain a good driving posture. Attention has also been given to rear seat support, design and comfort, and the outer rear seats now have larger head rests with better adjustment to minimise neck injuries in a crash.

Cargo space has increased in both body styles. Capacity in the hatch is up by 24 litres and the length has increased by just over 40mm. The cargo opening is wider with a lower edge, and the sedan's lower edges improve ease of loading and unloading.

It wasn't far into a relatively short drive program that the considerable improvements in noise and vibration reduction became evident. On the road there were only low levels of road or wind noise – even on coarse bitumen. Noise from passing cars was also minimal. The trademark drone from the CVT was intrusive but only harsh under strong acceleration, although the new seven-stepped gear ratios helped to make it sound a little more like a conventional automatic.

Ride quality is excellent, potentially class leading. Only once on some pretty rough back roads did we find the end of the suspension travel and that was over a very large pothole which, in many cars, would have sent an almighty thud and crash through the cabin. While still maintaining a luxurious ride, the suspension damping is not floaty and has good rebound. The Impreza has excellent body control – an almost perfect balance between comfort and dynamism, which few car makers achieve.

While on paper the Impreza has better power and torque figures than most of its rivals (115kW and 196Nm (compared with the Golf's 92kW/200Nm and Mazda3's 114kW/200Nm), the Impreza feels underpowered. Despite considerably more power than the Golf, the Impreza is slower to 100km/h.

The Impreza's real-world performance is stunted by the relative heaviness of the car (due to the weight of the AWD system). The Impreza is significantly heavier than both the Golf and Mazda. This also sees a fuel consumption penalty. The Impreza has a claimed combined consumption of 6.6L/100km versus 5.4L for the Golf and 5.8L for the Mazda. 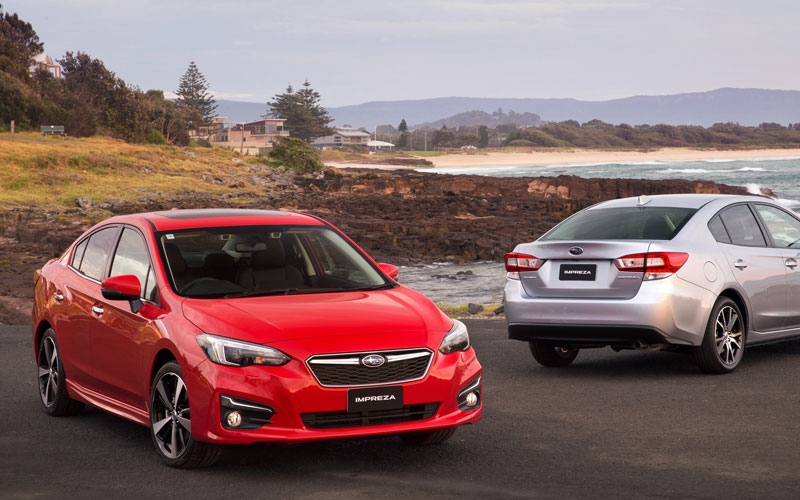 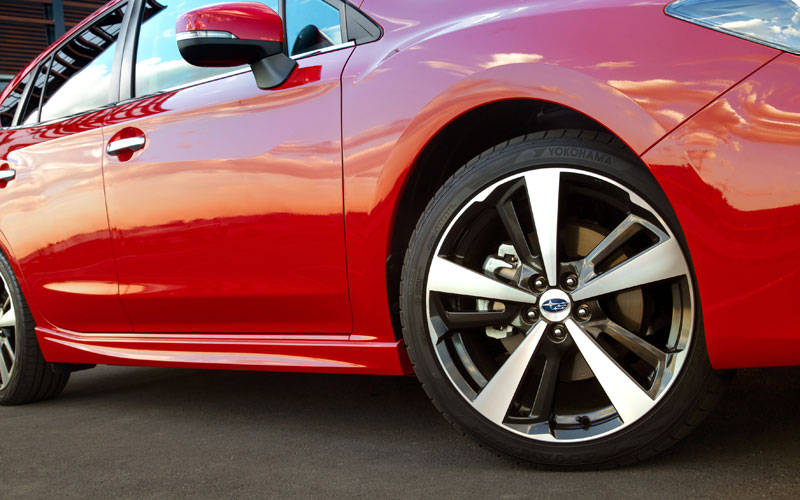 Subaru has often been criticised for overly complicated technology but the new Impreza offers a completely new system that easy and intuitive. Apple CarPlay and Android Auto are standard and the touch screens (eight-inch in the S and P and six-inch in the 2.0i and 2.0i –L) feature large buttons.

Pairing media devices is quick and no fuss. The touchscreen is a lot more practical than the previous rotary knob on the centre console area.

The previous model Impreza never felt overly cheap inside, but the new model is another step up. Subaru has paid particular attention to the quality feel and look of the cabin materials, and while there are a lot of dark materials it does feel more premium, especially the S models that come with leather upholstery.

There are plenty of storage options, with a covered centre console, reasonably sized glovebox, door pockets that can hold a 600ml bottle, front centre tray, seat back pocket on the passenger side and cup holders front and rear. There are two 12-volt power sockets and an auxiliary jack and two USB charging points in the centre console.

As mentioned above, the new interior packaging has increased almost all interior measurements and the Impreza certainly doesn't feel like a small car.


Should I consider one?

The Impreza is quiet, has excellent ride quality and handling, and is sharply priced in an extremely competitive part of the market, especially considering all-wheel-drive is standard across the range.

It is, however, let down by its relatively porky weight, which stunts performance and reduces fuel efficiency compared with its rivals. If you're happy to just trundle along, then the Impreza is an excellent option. If, however, you're looking for a more sporty drive, the Mazda3 and Golf move to the top of the list.

Turn your dream vehicle a reality with NRMA car loans