Everyone has a Corolla story. It's the model, more than any other that has built Toyota's reputation as a manufacturer of reliable and sturdy vehicles, ever since the first generation was released in Australia in 1968. By making steady improvements over the years the Corolla developed an enviable reputation that produced this slightly conservatively styled sixth generation vehicle, which was released between 1988 and 1992.

Here, Toyota redefined the popular small car market with 21 different models that were larger and tougher and only left out variations of a two-wheel-drive wagon or panel van, which were both popular Corolla models in years past. The release offered plenty of choice from simple and economical 1.4 litre sedans and hatches, to mid-range 1.6 litre sedans, hatches and liftbacks, to specialist models such as the all-wheel drive wagon or SX hatch and Seca (with a powerful 100 kW engine and four-wheel disc brakes).

Back then, the Corolla's 1.6 litre carburettor engine was the second best performer in its class with smooth and strong acceleration that tended to harsh at high engine speeds and delivered fuel consumption of 9.7 litres per 100 km. Seventy five per cent of these were Australian built twincam, multi-valve carburettor engines that also appeared in 1.4 litre. Fuel injection was available in the SX models and the wagon, but these had imported engines. Five-speed manual was standard across the range with different ratios and components for the sports models.

Up front, the well-lit instrument panel is great for night driving and easy to read for a driver who is positioned high up to make judging vehicle proportions in tight parking spots easy. The CS lacks tilt adjustments in the steering wheel, a tachometer, a separate clock, rear radio speakers for the AM/FM radio/cassette or power steering, but there are twin exterior mirrors, a split folding rear cloth trim seats, full wheel trims, front and rear mudflaps, body side protector strips and a driver's left foot rest.

The interior is pleasant and comfortable for the driver and front passenger with large cushion cloth trim seats in a cabin that has leg and head room suitable for most adults. However, this doesn't carry over for back seat passengers where, depending on how far those in the front want their seats pushed back, the space is more suitable for children. Indeed, much of this rear cramping is caused by ample boot space, which is easy to load with the rear panel cut down to the bumper.

The CS with non-power assisted steering is a little slow to respond and requires a greater than usual effort to move the car at low speeds with almost one whole extra turn lock-to-lock compared with power steering. Otherwise, this Corolla handles well with light operating gear changes and travels comfortably over a range of surfaces. Front disc and rear drum brakes work well in normal and emergency situations but tend to fade slightly after heavy usage.

The body width in this stockier Corolla is padded out with sound proofing and extra reinforcing braces and panels, which give this model a quieter smoother ride. The three body styles include: a hatch that is overbalanced shape-wise with a long bonnet, a sedan and the stylish Seca.

The usual service intervals apply: regular maintenance is scheduled for each 10,000 km or six months, with extra lubrication services specified for every 5000 km or three months for cars operating under conditions that include frequent short trips, dusty conditions or stop/start running.

The standard CS sedan is a solid, comfortable and well-built baseline model that spreads into a range of choices that includes more spectacular examples such as the Hatch or Seca with sports performance in the SX versions and versatility in the all-wheel wagon.

Faults to look for include: coolant leaks, uneven tyre wear, a worn clutch in manual transmission cars and worn bushes in T bar selector on Automatics. Check that all the windows wind up and down because lift channels commonly corrode and break.

Looking to buy a used car? 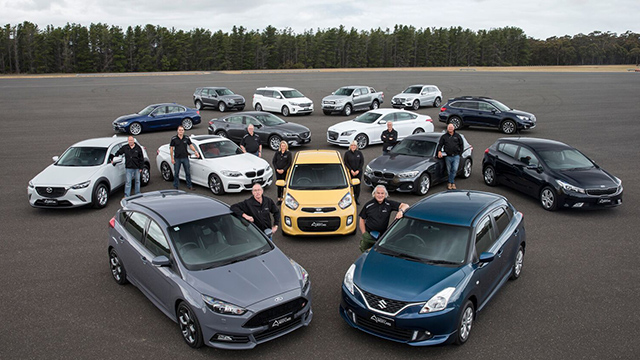