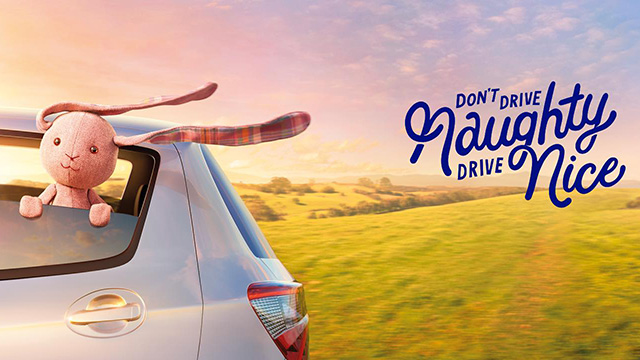 The NRMA is reminding drivers to put their phones away this Christmas with almost 42,000 fines issued last financial year and drivers at risk of losing 10 demerit points if caught over the double-demerit holiday period.

The NRMA reminder comes in the same week that NRMA Insurance has launched its Christmas Road Safety campaign, Don’t Drive Naughty Drive Nice, which drives home the message of not using your phone illegally through the adventures of a young girl and her animated bunny.

NRMA spokesperson Peter Khoury said the campaign provided a timely reminder of the role loved ones, both real and stuffed, could play in keeping us safe this Christmas.

“An important message from the NRMA Insurance campaign is when it comes to safety in the car nobody is too young to speak up if they see something wrong,” Mr Khoury said.

“Fifteen per cent of people who use their phones illegally think they won’t get caught and not every driver will have the watchful presence of a child and her talking rabbit in the car so the onus must be on all of us to put our phones away.”

Drivers caught using their phone illegally these Christmas holidays will lose 10 demerit points and $337. Around one-in-10 fatalities involved illegal phone use and the measures taken today were designed to prevent this behaviour surpassing speed or drink driving as a road risk.

“Education – such as the NRMA Insurance campaign we are seeing this Christmas – backed up by strong enforcement is the most effective way to stop people using their phones illegally behind the wheel,” Mr Khoury said.

“It is anticipated that next year there will be new camera technology rolled out across NSW to help detect illegal mobile phone use. The NRMA supports this technology if it includes warning signs.

“However at the end of the day when we measure up the safety of our loved ones with the temptation to check your Facebook feed or send a text, it’s a no-brainer.”

The number of people caught using their phones illegally has grown 18 per cent since 2014/15. Alarmingly fines continued to increase even after the number of demerit points rose from three to four in January 2016:

To learn more about the Don't Drive Naughty Drive Nice campaign, visit www.nrma.com.au/drivenice. Here, you can also view a 'behind the scene' exclusive for the advert, download entertaining Christmas podcast for the kids, presented by some of Australia’s favourite personalities including Guy Sebastian, Fitzy and Wippa, Yumi Stynes, and so much more!