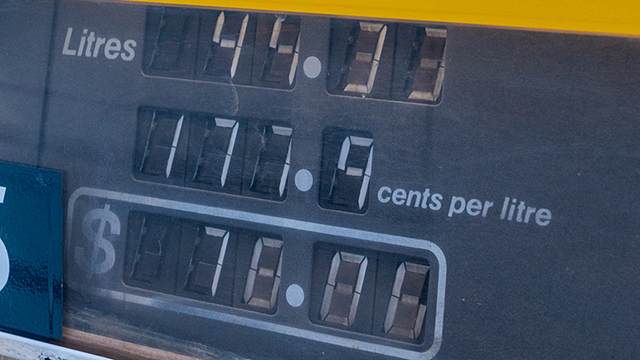 Monday 18 October 2021: Sydney has broken an unwanted milestone overnight with its average price for regular unleaded breaching 170 cents per litre – the highest on record.

There is also little relief in sight for motorists as prices continue to rise steeply across the city. Average prices for regular unleaded are expected to peak in the coming days to over 174 cents per litre before slowly falling again.

The average of 170.2 cents per litre has climbed off the back of seven-year-high oil prices driven by rising demand globally at the same time that production levels have been kept stubbornly low by oil producing countries.

Melbourne (174.7 cents per litre) and Brisbane (176.6 cents per litre) have also broken the record for highest average prices in those cities today. The gap between the cheapest and most expensive service station in Sydney today is 56 cents per litre – a $31 saving on a full tank of fuel.

Singapore Mogas, Australia’s international benchmark price, closed trading last week at almost $US100. It has risen $US84 a barrel since July last year. The gap between the cheapest and most expensive service station in Sydney today is 56 cents per litre – a $31 saving on a full tank of fuel.

Diesel prices are also rising quickly as Gasoil prices climb to $US98 a barrel, with average prices for diesel now at 158 cents per litre. Diesel prices are expected to continue rising as European countries look to use it as a substitute to gas.

“These record prices could not have come at a worse time – just as families are getting out and about the city’s economic activity was meant to be ramping up,” Mr Khoury said.

“With OPEC showing no desire to increase oil production levels, we are now seriously concerned that there is little relief in sight and that is bad news for families and the economy.

“These prices are going to hurt family budgets and the importance of doing some research before filling up has never been clearer. The mynrma app has an 86 cent gap between the cheapest and most expensive service stations.”

How to find the cheapest fuel prices Sydney