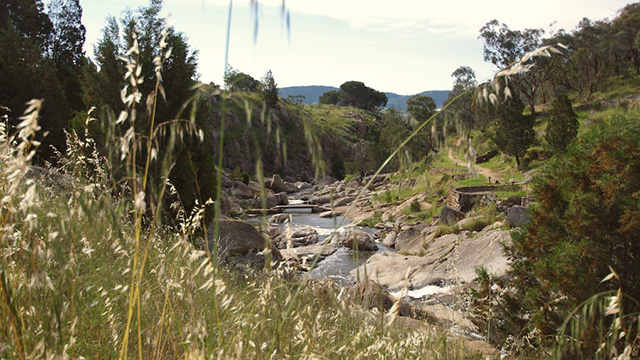 Indigenous tourism offers unforgettable experiences that give a newfound connection to the diverse landscapes and people across NSW.

The COVID lockdown has been a time of introspection for the tourism industry. Local operators are feeling the pinch of international and interstate travel restrictions but many are finding new and innovative ways to attract domestic visitors.

Indigenous tourism, in particular, offers a uniquely homegrown escape with the potential to have a deep and profound impact on your soul. There’s such a wide range of experiences on offer and the level of luxury, comfort and physical effort is entirely up to you. And with so many different Indigenous nations within NSW, you don’t need to travel far and wide to immerse yourself in rich and diverse cultures.

The town name of Wagga Wagga was previously thought to come from a Wiradjuri word meaning ‘place of many crows’, but in 2019 this was officially corrected to ‘many dances and celebrations’. Here we meet Mark Saddler, an award-winning Wiradjuri tourism operator from Bundyi Cultural Tours. The Macquarie (Wambool), Lachlan (Kalari) and Murrumbidgee (Murrumbidjeri) rivers all border the Wiradjuri lands. Known as the ‘people of three rivers’, the Wiradjuri are the largest Aboriginal nation in Central NSW by area and population.

Mark collects us from our hotel in his luxury seven-seater for a ‘Welcome to Country’. He tells us about the significance of rivers to the Wiradjuri and other Aboriginal histories before painting us in ochre. With fascinating cultural pitstops along the way, we’re whisked up the mountain to Courabyra Wines. Owner Cathy Gairn employs Wiradjuri staff and is proud of the rich Aboriginal heritage of Courabyra, which means ‘pleasant place, family gathering’. 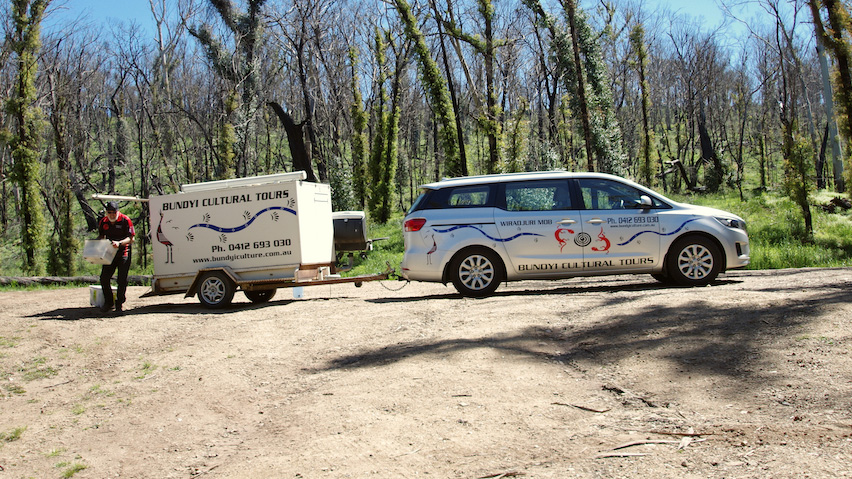 We sit down to a menu featuring a ploughman’s lunch, pan seared salmon and wine tastings. You might wonder how it all fits into Aboriginal culture, but the entire time Mark gently regales us with yarns about the Wiradjuri, pointing out significant features in the surrounding landscape. Having never realised that Indigenous language was so onomatopoeic (words imitative of the object they describe), one of the things I most enjoy about Mark’s tour is the way he unpacks language.

Our next destination is Adelong Falls Gold Mill Ruins (pictured at top of story) where much of the old gold-mining equipment is still intact. I’ve visited this extraordinary site before but enjoy seeing it through a Wiradjuri lens. Unfortunately there’s a lack of signage relating to the Wiradjuri (they earn a lone paragraph). Mark tells us they walked this ngurambang (country) for millennia and are part of the garray (land) here. We listen to Mark’s yarns against the burbling soundtrack of the river and he shows us tools, spears and other items the Wiradjuri used to hunt and gather food.

Chauffeuring us back to the hotel, Mark points to scar trees (bark canoe trees) along the road and dubs Lydia with a totem: Boobook (wise owl). But we agree it’s actually Mark who’s clever, for creating an interesting Indigenous cultural experience that’s easy to dip your toes in.

The Wilyakali (or Wiljaali) traditional lands are centred on the towns of Broken Hill and Silverton and prove that you don’t need to drive all the way to the Red Centre to experience Indigenous desert culture. The last time we were at the Mars-scape city of Broken Hill, we met guide Mark Sutton from Tri-State Safaris.

As we navigated gun-barrel red dirt roads, flanked by a monochrome of grey mulga, Mark stopped to drag a dead 'roo off the road. Panting from the exertion, he explained it was to protect wedge-tailed eagles, which are attracted to the roadkill and have poor uplift ability to escape oncoming cars.

Around 130km north-east of Broken Hill is Mutawintji National Park, the traditional land of the Malyankapa and Pandjikali people. It’s a special place for Indigenous Australians, boasting one of the largest collections of Aboriginal rock art in NSW and has been the site for ceremonies for thousands of years. Indeed, the Barkindji people blockaded it in the 1980s until it was begrudgingly returned to the traditional custodians. It’s now managed by the Mutawintji Local Aboriginal Land Council. 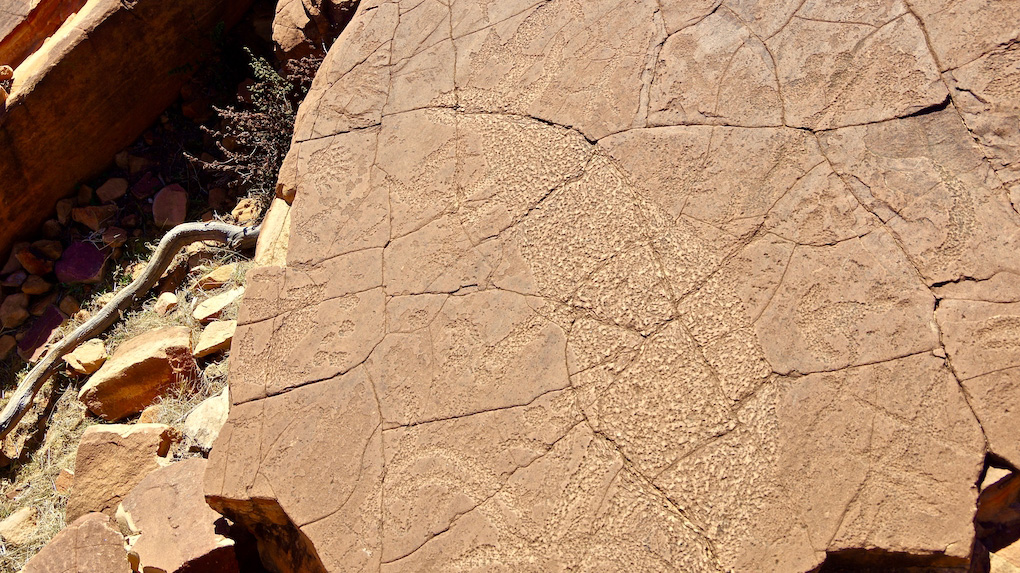 Pictured above: Petroglyph of a wallaby

There are several walking tracks and the easiest for a writer with a dodgy hip is to Thaaklatjika – a rocky overhang that features excellent hand stencilling. This is where ochre paste is sprayed from the mouth over the hand of the artist and onto the cave wall to signify initiation and record the event. Thaaklatjika is also known as Wright’s Cave in reference to William Wright, manager of Kinchega Station at Menindee. Wright signed on to search for the ill-fated Burke and Wills expedition of 1860. He visited this area in 1859, thoughtlessly graffitiing his initials inside a blue painted triangle over one of the ancient artworks.

After a tougher walk along an undulating stone path you can view ancient petroglyphs (rock carvings). These are said to be over 8000 years old and the patterns have been pecked into the soft sandstone with quartz tools. Here we see a carved wallaby (pictured left), possibly indicating food was in the area.

The name Nambucca comes from the Aboriginal word ngambugka, meaning ‘winding or crooked river’. Arriving at Yalla Beach, we meet Aboriginal elder, Uncle Micklo, to learn about the local Gumbaynggirr culture and their lands stretching from the Nambucca River in the south, to the Clarence River in the north and the Great Dividing Range in the west. Most Indigenous people from Grafton (Jadalmany), Coffs Harbour (Garlambirla) and Nambucca (Nyambaga) identify as Gumbaynggirr.

Uncle Micklo is a real character. Born and bred in Nambucca, he traces his family back to when white pastoralists first arrived. “The family name is Buchanan,” he says. “Because my great grandfather worked for the Buchanans.” He looks around for bush tucker as if in the fresh food aisle of Aldi, sampling some of the flora and naming them in the Gumbaynggirr language. I’m fascinated by the nexus of Indigenous languages and I notice some words are the same in Wiradjuri. “Yes!” he says. 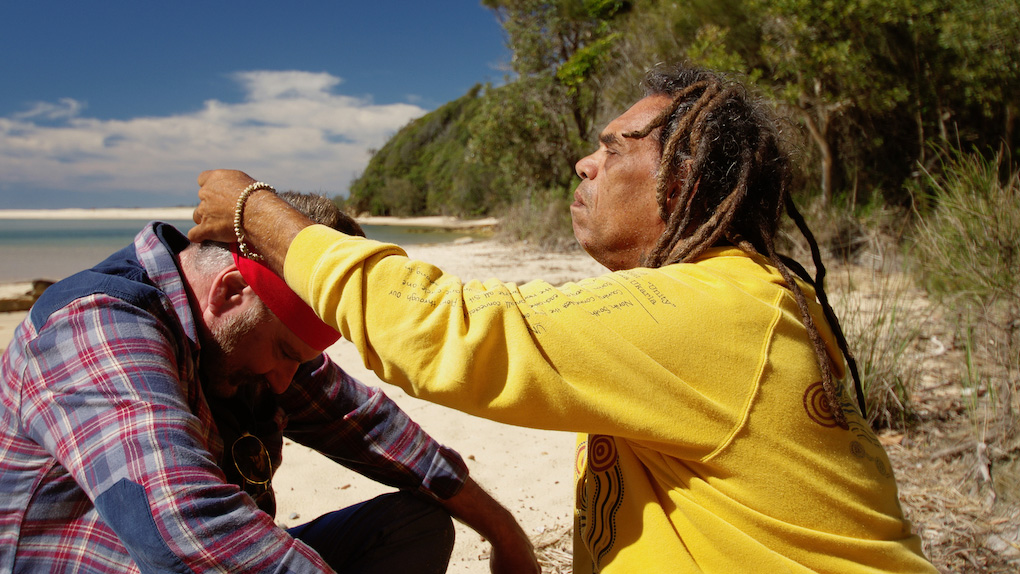 As we sit, he gently paints our faces with local clay. Picking a bouquet of gum leaves, he then begins a smoking ceremony, before singing in language. His mellifluous brogue carries our minds back through the ages and the mystical ceremony leaves you with a deep sense of ancient magic. He then trawls for bush tucker, discussing the daily needs of Indigenous people for millennia. I’ve never met a guide so enthusiastic about bush tucker. He could’ve been eating canapés at a  MasterChef event. “Try this!” he says, thrusting leaves at me. “Tastes great, doesn’t it?”

Mick grew up on Bellwood Reserve, and spent the majority of his adult life there. Like Mark Saddler’s father in Wiradjuri country, language was taboo on the reserve. The elders didn’t speak Gumbaynggirr to their children, so traditional language was dead to him for most of Mick’s life. Ultimately, he enrolled in a Masters in Indigenous Languages degree and explored the linguistics of Gumbaynggirr.

As we chat, Uncle Micklo looks out to sea. Over the white noise of surf, he suddenly turns to me. “You have to understand, when we were here 12,000 years ago, the coast was 120km east. Our people lived in sacred places that are now under the sea.”

I won’t gaze out to sea again without thinking about these lost worlds of the coastal people. He then talks about sisters who chanted and used digging sticks to create the ocean. All the time he’s speaking, his hands make shapes, as if balancing two imaginary spheres.

Looking up, we then discuss the stars and ‘Seven Sisters’ (the Pleiades constellation). These important Gumbaynggirr yarns connect them to the land. The Star Dreaming story of the Seven Sisters is one of the fundamental ancient stories in Aboriginal Australia. This songline covers more than half the continent and travels through numerous language groups. Again, I’ll find it hard not to look at the stars without seeing the Seven Sisters.

Kariong is my hometown and our final stop on this adventure. Its name means ‘meeting place’ in the local Darkinjung language. Indigenous tourism operator Girri Girra is owned by Tim Selwyn, an ex-colleague from NAISDA college, where I had the great privilege to teach Indigenous students for four years. Darkinjung country extends from the Hawkesbury River in the south, to Wollombi in the west and the Hunter River in the north. Kariong has been their ‘meeting place’ for thousands of years. 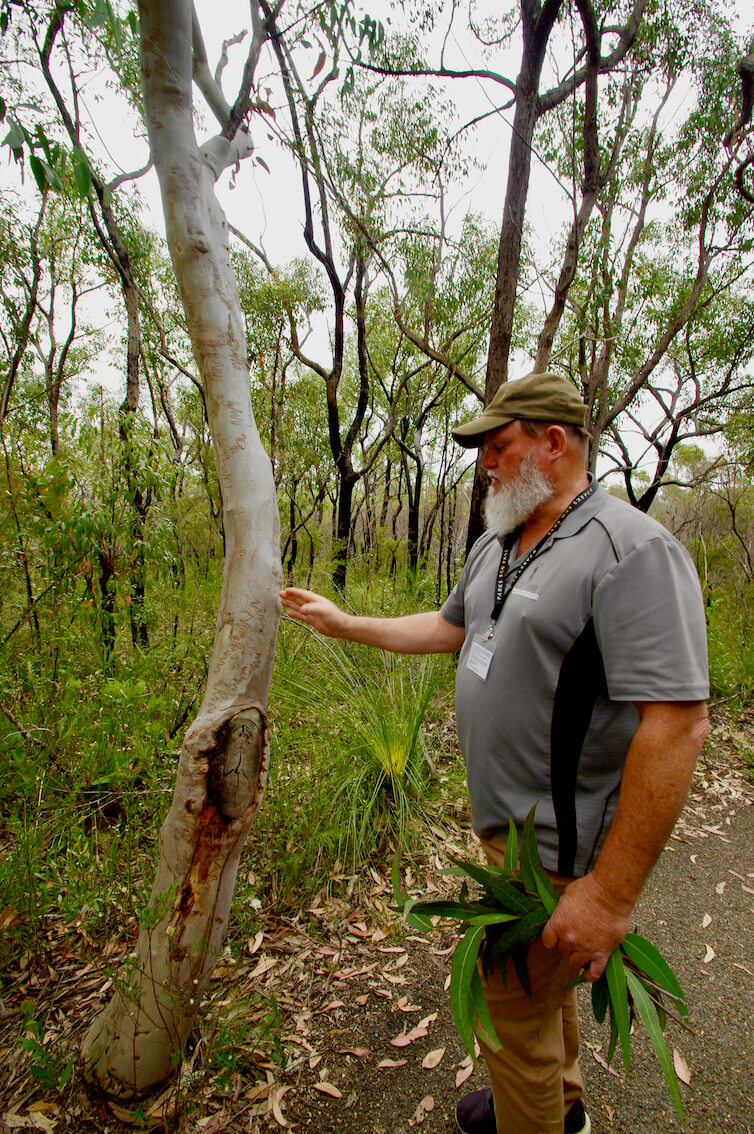 Above: Graffiti scribbled into tree 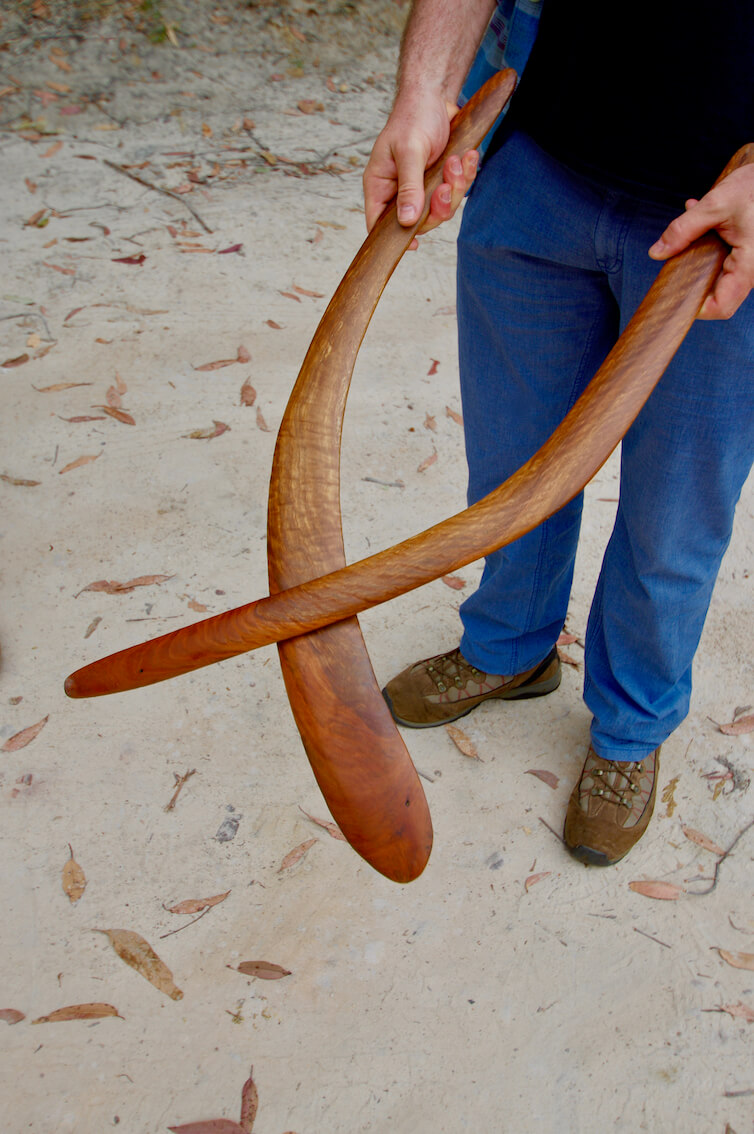 Above: Boomerangs made from scratch

We meet Tim at the Bulgandry Aboriginal Engraving Site which so few Kariong locals even know about. Ray, my 81-year-old neighbour who’s lived on the Central Coast all his life, confesses he’s never been there. And it’s not like you have to machete through scrubland to find it – the car park is right off Woy Woy Road, with footpath access all the way.

Tim takes two long boomerangs and some gum leaves to sing us to country, circling and chanting an ancient melody. Most Indigenous cultures are based on oral traditions that the elders pass on and Tim is a skilled storyteller, having guided tourists since he was 14 years old.

The breathtaking carvings at this remarkable site are 12,000 years old. Its ancient history makes even Stonehenge seem like it was assembled at Ikea. Tim says the NSW National Parks and Wildlife Service has done an excellent job maintaining the site, but he frets about vandalism and indicates some nearby graffiti. What’s the solution? “Education,” says Tim. This is why a lot of his tours are for pre-schoolers. “Respect for culture and country starts at the beginning.”

Over the next 40 minutes, Tim unpacks the hidden meaning of the petroglyphs. Like a museum tour guide describing Van Gogh’s processes, he’s engaging and gives you a new appreciation of your surroundings. While I’ve visited the site before, Tim guides us down a secret path to a carving that I’d not seen before: a giant whale that’s the totem of the Darkinjung people. It’s quite moving and is the perfect denouement for the tour. We leave with a deeper understanding of this ancient culture and a feeling of mindfulness and connection to country. 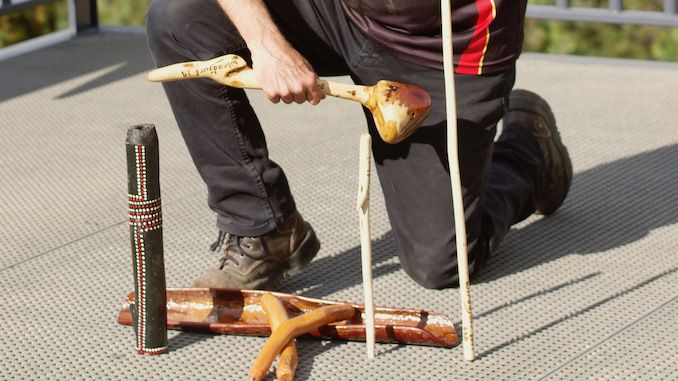 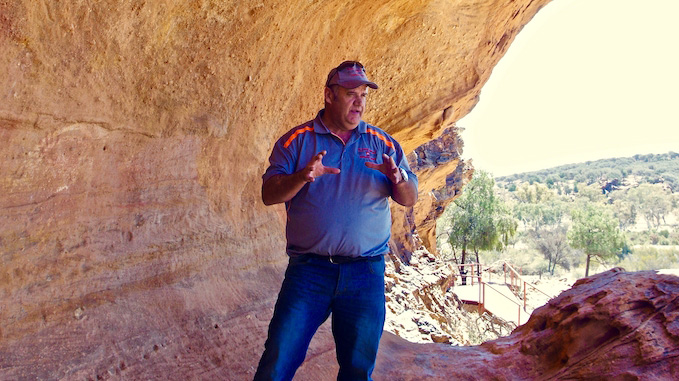 Above: Touring a cave in Broken Hill

From ancient songlines and Dreaming yarns to bush tucker and smoking ceremonies, they offer profound and diverse experiences that will enrich your next holiday.

“NSW can offer visitors some of the most accessible and authentic experiences in the nation. Our Aboriginal tourism operators offer a unique perspective on the land, the history and the culture of our regions,” adds Mr Ayres. With international travel still fraught with difficulty, now is the perfect time to experience culture in your own backyard.

Similar to removing your hat before entering an RSL club, there are ways to convey respect when visiting Indigenous sites. Here are the writer’s thoughts on the subject:

This story originally appeared in The Open Road magazine. 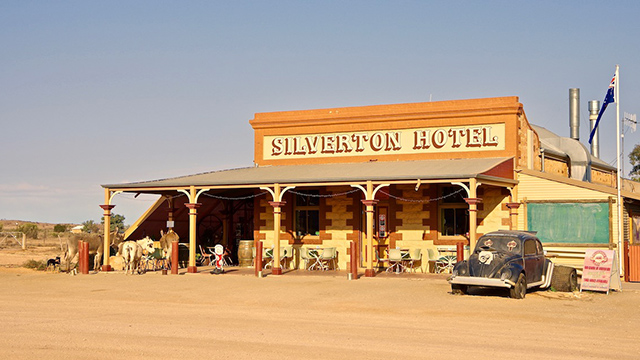 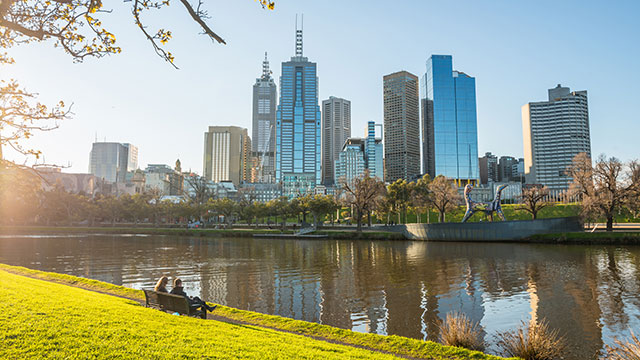 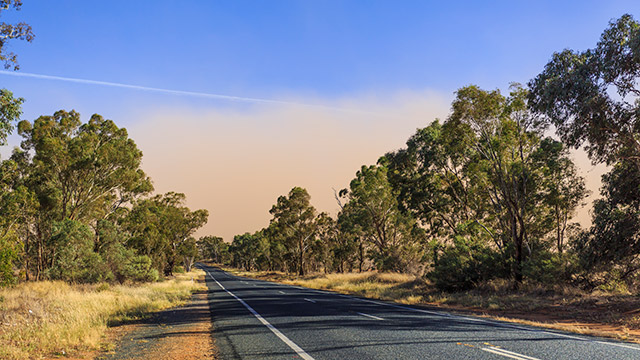