For all us mainlanders, the closest thing to an overseas holiday this year might be a trip to Tasmania. Indeed, one can only imagine how true this would be if the French Empire’s interest in the island around the turn of the 19th century had borne fruit. Perhaps we would all be heading across Bass Strait to brush up on our Français, dine on escargots, and visit bakeries overflowing with buttery croissants and macaroons, while marvelling at the Apple Isle’s French colonial architecture.

Though events didn’t turn out that way (Ces’t la vie!), Tasmania is still somewhat a world apart from the rest of Australia and can be both a rugged outpost and luxurious den for visitors. Its horrifyingly grim colonial history – wherein it received around 45 per cent Australia’s total transported convicts and its Indigenous inhabitants were subjugated and slaughtered – is juxtaposed with natural wonders that will take your breath away.

After flying into Hobart, you’ll first want to tick off a few prerequisites. The Museum of Old and New Art (MONA) is marking its 10th anniversary this year, all the more worth celebrating after a long hiatus due to COVID. It closed in March 2020 and only reopened on Boxing Day, with its visiting days now Fridays to Mondays. According to its website, “Pre-bookings are a must. Even if you’re Tasmanian”. Locals, of course, have enjoyed free admission since MONA first opened its doors, but must now leave a small booking deposit ($10), which is then refundable on their visit.

There are new art installations that include a labyrinth of mirrors and a giant bronze sculpture that doubles as a children’s playground complete with slippery slides. Many other new pieces have come from MONA creator David Walsh’s personal collection and are said to give some insight into the man behind the curtain. Visitors are required to download the MONA app and bring their own headphones, which will serve as a digital guide to the museum and cut down on shared contact surfaces in these COVID times.

The pandemic has also affected operations of Hobart’s famous Salamanca Market. As Tasmania’s most visited tourist attraction, it has had to change to meet government restrictions and is now open on Saturdays as a slimmed down version, known as Tasmania’s Own Market. It’s still the best place to pick up a handcrafted souvenir or browse locally grown and made food treats from 135 artisan and designer stallholders. If you’re travelling with your dog the market even has ‘puppy parking’, where your pooch will get a designated leash tie-up area with a mat, water bowl and supervision from an RSPCA volunteer.

Another must-do Hobart experience is visiting the summit of Kunanyi/Mount Wellington. At just a 30-minute drive from Hobart’s CBD, it’s often sprinkled with snow and proudly shows off its distinctive dolerite columns, aptly named the Organ Pipes, to the city’s residents in an eternal reminder of home.

Its access road was built in the 1930s to provide employment during the Great Depression. The weather up top can be extreme, so it’s always advisable to bring something to rug up in and you can check live webcam shots on Hobart Council’s website to see conditions beforehand and whether there are any low clouds to impede your spectacular view of the city and its surrounds below.

But Mount Wellington is more than just a lookout. Its parklands have a number of walking tracks that range from very short and easy (less than an hour) to day-walks exploring more remote parts. Fire trails also provide links between them and are a reminder of the ever-present bushfire threat in Wellington Park – none more catastrophic than the one in 1967 that claimed 62 lives, 1300 homes and around 90 per cent of its bushland. These days, the park closes if the fire danger is severe, extreme or catastrophic.

It’s almost impossible to exhaust Hobart’s attractions, so you will have to tear yourself away if you want to explore the Tasmania delights further afield. Those pressed for time might have to choose between heading to the west or east coast. Generally speaking, the west coast is the more rugged of the two, with gorgeous mountains and wilderness, while the east coast tends to have a more laid-back beach vibe. We head to the west coast first, before driving inland and over to the east coast, while staying in Strahan Village, Cradle Mountain Hotel and Freycinet Lodge.

At around 300km north-west from Hobart, Strahan (pronounced ‘straw-n’) sits on Macquarie Harbour, which is six times the size of Sydney Harbour and Australia’s second-largest natural harbour behind Melbourne’s Port Phillip Bay. That’s a whole lotta waterway for a town with a population of around 700, but this number more than triples during the high summer tourist season. Those visiting at other times of the year must keep in mind that Tasmania’s west coast is often assailed with the frigid wind and rain of low-pressure systems from the Antarctic Ocean.

Our digs at Strahan Village are situated in the heart of town, overlooking fishing boats and yachts moored at the wharf. This is also where you can hop aboard a Gordon River Cruises vessel and venture deep into the UNESCO Tasmanian Wilderness World Heritage Area. Among its stops for walking tours is Sarah Island, which was established as a remote penal colony from 1822 to 1833 and is reputed to have been one of the harshest in Australia, reserved for the very worst offending convicts. The settlement’s ruins speak of isolation and brutality. Prisoners were regularly flogged and sickness and malnutrition were rife – quite at odds with a tour where every comfort is taken care of and pristine wilderness abounds.

For those keen to experience more awe-inspiring natural beauty, Cradle Mountain is less than a two-hour drive north-east from Strahan. Its national park is home to Lake St Clair, Australia’s deepest glacial lake, surrounded by mountainous forests and walking trails. Those visiting in autumn will notice its fagus-covered hillsides turn gold as Australia’s only deciduous tree, found nowhere else in the world except Tasmania, begins the process of shedding its leaves.

Wildlife such as Tasmanian devils, quolls, wallabies, wombats, possums, platypus and echidnas all live in the park, making it a nature photographer’s paradise. If you’re not fortunate enough to spot them in the wild, you can get a guaranteed close-up encounter at Devils@Cradle, a conservation sanctuary situated at the entrance to Cradle Mountain-Lake St Clair National Park. It focuses on Tasmanian devils but also has spotted-tail and eastern quolls. Visitors can join day and after-dark feeding tours or even interact with its youngest residents on a joey encounter tour.

Cradle Mountain Hotel is set amongst alpine woodland on the fringe of the national park and is the perfect place to retire after a day spent exploring forests, lakes and gorges. At its Altitude Restaurant we opt for the 200-gram Cape Grim eye fillet with red wine jus and chips. The difference here is that its two medallions are served on a 400°C volcanic stone, cooking them to your liking right in front of you.

Back on the road again, Freycinet National Park is just over a 300km drive eastwards that you may prefer to break up with a short detour to Tasmania’s second most populated city, Launceston. Settled in 1806, only a few years after Hobart, it’s filled with many historic buildings and features the mightily impressive Cataract Gorge that carves its way through the landscape just 1.5km from the city centre.

The tiny village of Coles Bay signals the entrance to Freycinet National Park and it’s only a 10-minute drive further to our accommodation at Freycinet Lodge. This eco retreat is set against the majestic Hazards mountain range and at the edge of the blue waters of Great Oyster Bay. Guests can bushwalk through the stunning scenery of the national park, kayak to secluded coves around the bay, or take a catamaran cruise to view the giant cliffs. We even visit a nearby oyster farm and pop on a pair of waders so we can harvest and sample oysters straight from the ocean – but, of course, not before giving a customary, “Bon appétit!”

If you are planning an expedition to Tasmania, Cradle Mountain Hotel, Freycinet Lodge, Strahan Village and Gordon River Cruises are part of the growing NRMA family. That means they’re owned by you, our Members, so you'll receive a 25% discount on accommodation year round.

Members get the Open Road magazine delivered for free. 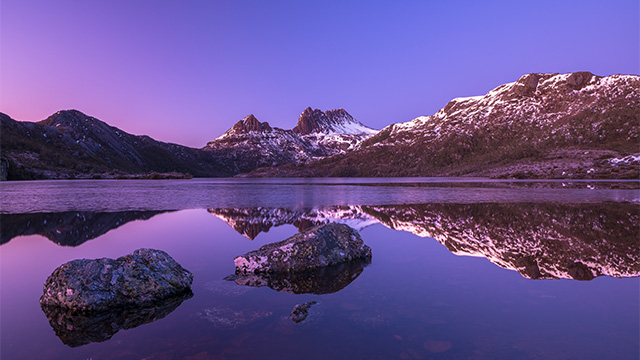