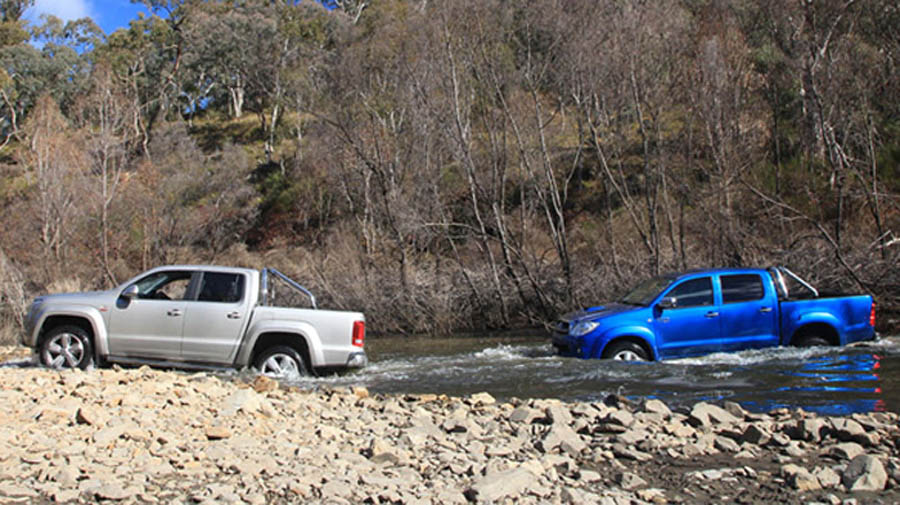 Toyota's established, market-leading legend, the HiLux, takes on Volkswagen's Amarok. Is the king about to be dethroned?

It doesn't get much more significant in off-road or worksite circles than the legendary Toyota HiLux. Not when it comes to utility vehicles anyway… but, new kid on the block, Volkswagen, has plenty of pedigree when it comes to building utes.

See, way back in 1952, you could buy a single-cab Split Screen Kombi. A dual-cab followed not long after, so the Amarok isn't VW's first effort by any means. It's fitting then that the manufacturer of the original 'people's car' should contest the space occupied by the current 'people's utility'.

We're testing a top-spec HiLux SR5 dual cab with turbo-diesel and manual transmission. Similarly, we have a top-spec Amarok Ultimate (a Highline, which is cheaper than the HiLux by a few hundred dollars, and features selectable four-wheel drive, wasn't available at the time of our test) with twin-turbo diesel and manual gearbox. The HiLux rings the register at $55,690 and the Amarok at $58,490. The only differences between the two vehicles are the leather trim in Amarok – HiLux has cloth – and the low-range system in HiLux – Amarok Ultimate runs permanent four-wheel drive rather than selectable four-wheel drive (this is available in other model Amaroks).

The Toyota has a certain rugged beauty about it; purposeful, rugged and with no unnecessary embellishments or accoutrements, there's nothing there from a styling perspective that doesn't need to be there.

From a functionality perspective, the air-intake is up nice and high in the engine bay making water crossings and dusty roads a breeze, the side steps are tough and positioned so that you can actually use them, and there are four sturdy tie downs in the load tray. Our test model had the optional plastic tray liner, which is a smart choice for dirty weekends, and there are genuine recovery points front and rear.

Like the HiLux, the Amarok is well served with recovery points that actually work, decent side steps and an air-intake that is up out of the way of water. No matter how you approach it, the Amarok is a good-looking beast and it's big too.

From mirror-to-mirror, the Amarok is 120mm wider than the HiLux, which makes for a much roomier cabin. And that's mirrored in the back of the car; between the wheel wells in the tray the Amarok is nearly 200mm wider, which is seriously impressive when you're lugging awkwardly sized loads.

VW's Amarok makes up for its small capacity with an impossible amount of flexible torque that is delivered right when you need it. The engine is a 2.0-litre inline twin-turbo four-cylinder diesel, developing 120kW at 4000rpm and 400Nm from just off idle at 1500rpm – 2500rpm. Thanks to two turbochargers working in sequence there's almost no let-up in power, and virtually no lag either.

Mated to the back of the engine is an excellent six-speed manual (no auto available yet and this could hinder the initial take-up of the model). It offers a short throw and is nicely weighted so that you never get tangled up on gates as you do with some other manual transmissions in utes (and we're talking about Holden's agricultural manual).
The HiLux goes with a tried and true formula that was perfected in Prado and transplanted into HiLux. That is, a large capacity four-cylinder and five-speed manual gearbox. We specified a manual in this test vehicle given the Amarok is currently only available with a manual - most owners these days would opt for an auto.

And it's easy to see why, the five-speed 'box in the HiLux does the job, but it's nowhere near as refined or easy to use as the Amarok's manual.

The 3.0-litre turbo-diesel engine is, like the Amarok, also an inline four-cylinder, but is significantly larger in capacity and quite a bit less refined. Electronic Direct Injection helps to deliver 126kW at 3600rpm and only 343Nm between 1400 – 3400rpm. It's a marginal difference in torque and thanks to the grunt coming in a little earlier you don't ever feel like the HiLux is left wanting.

In terms of fuel consumption the Amarok, which is quite a bit bigger than the HiLux, returned 8.5L/100km on the combined cycle, but it was just pipped by the HiLux, which returned 8.4L/100km – not bad, given the Amarok is 200kg heavier. The fuel tank capacities are close too, 76L for HiLux, and 80L for Amarok.

The HiLux gets steering wheel-mounted controls, the Amarok does not. And at the better part of $55k, we reckon steering wheel controls are a must.

And speaking of the steering wheel, taller drivers will find the too-low mounted steering wheel that seems to sit right in your lap, annoying. Not so the Amarok, which feels more car-like in the driving position it offers.

Vision on both vehicles is excellent, although the bigger windows on the Amarok provide slightly better vision for shoulder checks, important in such a big vehicle. 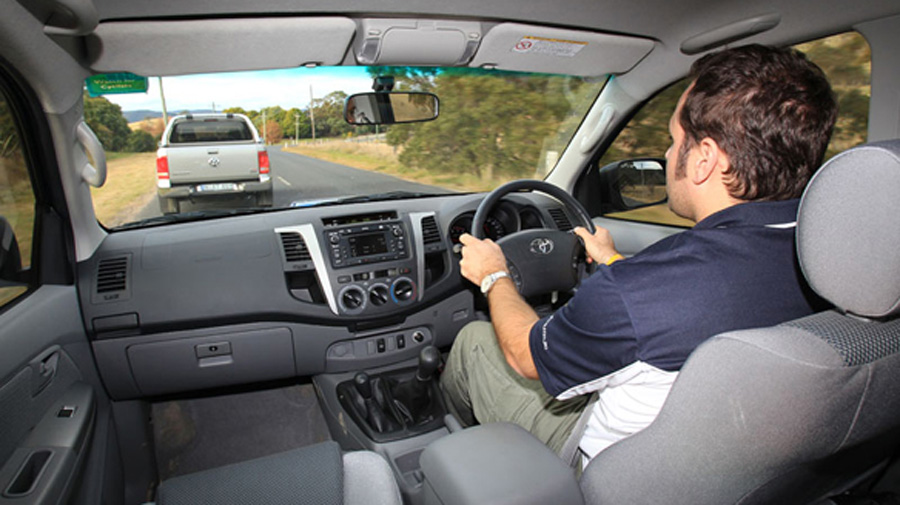 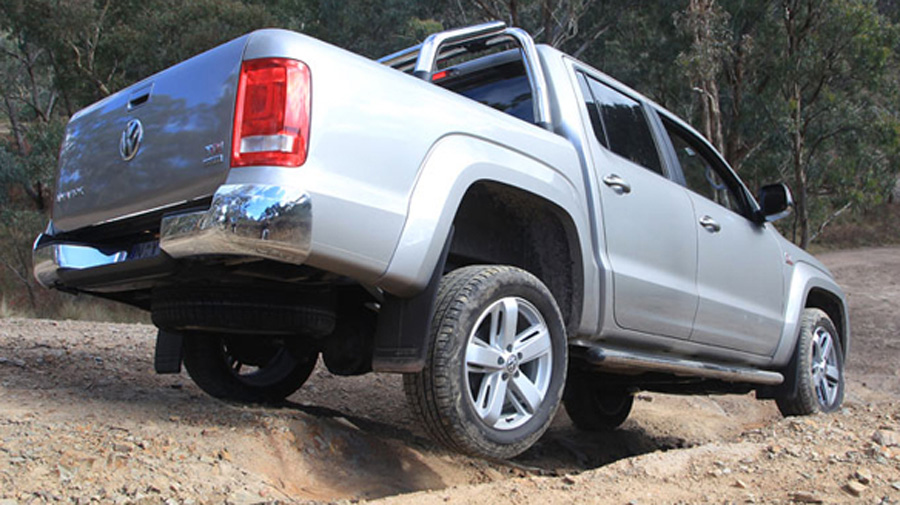 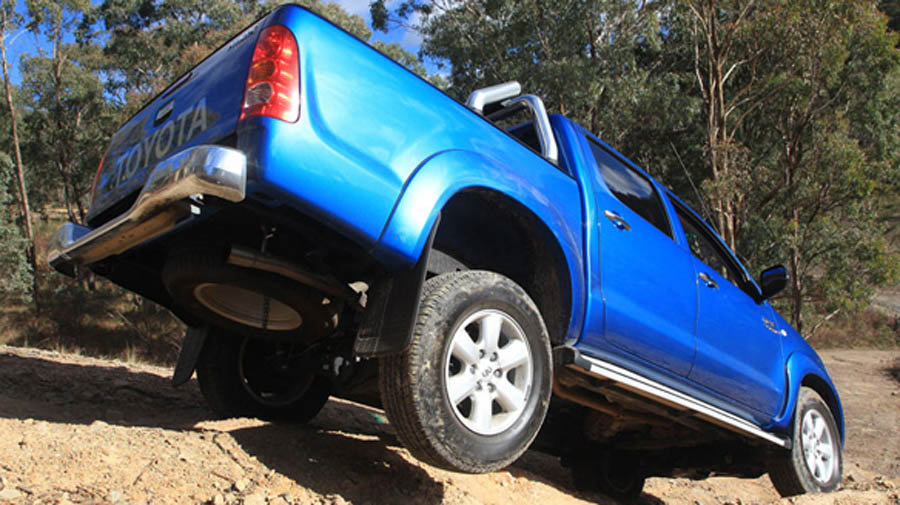 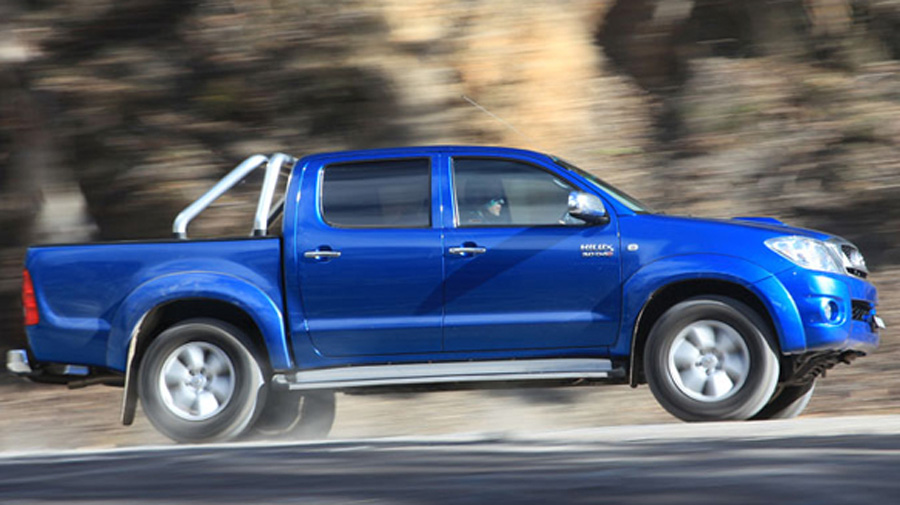 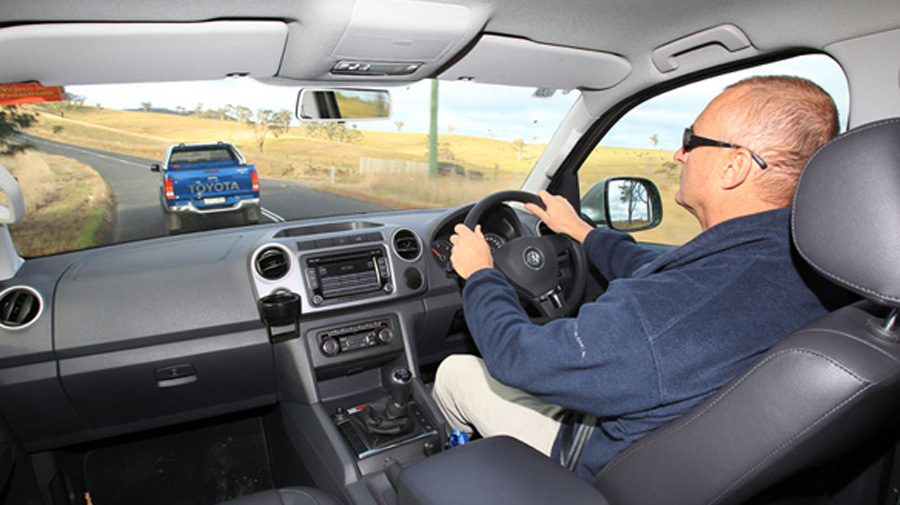 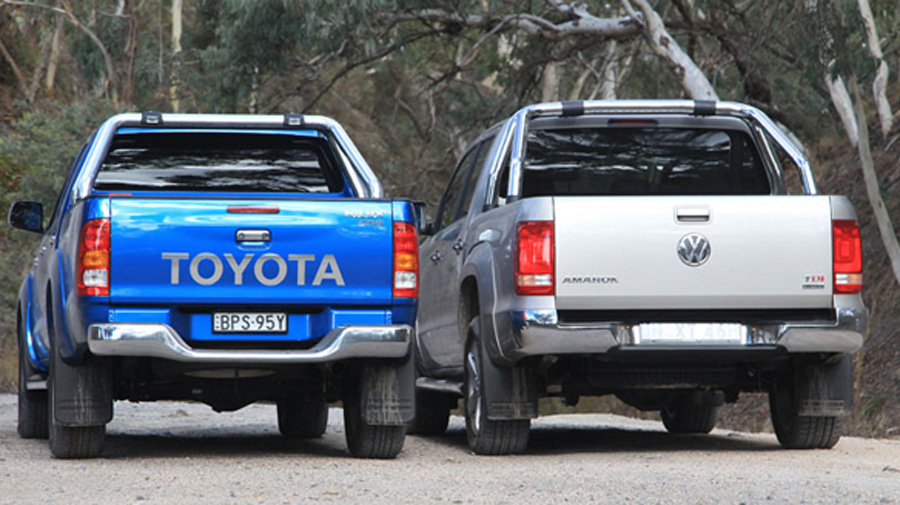 The Amarok is on another planet entirely compared to any other utility we've tested. And the reason for that is because of the position of the leaf springs at the rear. Rather than using the traditional mounting position of underneath the chassis rails, the Amarok's springs are mounted outboard and up alongside the chassis rails. It might not sound like much of a change but it makes a significant reduction in the 'pogo' effect of a normal unladen dual cab utility.

The steering is also utterly brilliant in the Amarok: turn-in is sharp and there's decent weight – seems hard to believe we're talking about a workhorse. In corners, and this comes back to the position of the leaf springs, the Amarok feels planted no matter the road surface, there's minimal body roll and it shrugs off mid-corner bumps like no other ute on the market.

While the clutch action is softer and has less feel and the gearshift is longer and less precise than the Amarok, we quite like the taller first gear which allows a smoother take off from, say, traffic lights. You're not rushing for second gear, like you are in the Amarok.

Head into the rough stuff and the playing field starts to even out, but that's only because the Amarok Ultimate is permanent four-wheel drive only. You have to look lower down the food chain for an Amarok that runs low-range. So, it's only a lack of low range in this particular test vehicle that stopped it from climbing up the nastiest of tracks we pointed it at. That said, very few four-wheel drives, even with low-range have made it to the top of the particular hill we were driving on.

The HiLux's longer travel suspension is slightly more suited to off-road work and traction control makes a massive difference when things start to get slippery. Ground clearance is almost identical between the two, but the HiLux's harder springs mean it bottoms out less in the really rough stuff than the Amarok. But then, the Amarok has the best under body protection of any ute on the market. Approach, departure and ramp over angles for both vehicles are excellent.

Toyota's HiLux is the best-selling ute and has been for donkeys years, but at this end of the ute segment, where buyers are looking for work and play its free reign has come to an end. And with Ford Ranger and Mazda BT-50 about to enter the market, things are about to get real interesting.

As good as the HiLux is, and it is very good, it feels dated next to the Amarok, and we're not sure the updated HiLux due soon will address that. Volkswagen has entered the most heavily competitive end of the market with a vehicle that looks better, feels better, drives better, is bigger inside and out, and can tow much more than the HiLux. The king is dead.

All workmanship from NRMA car servicing comes with a 20,000km or 12 month guarantee.