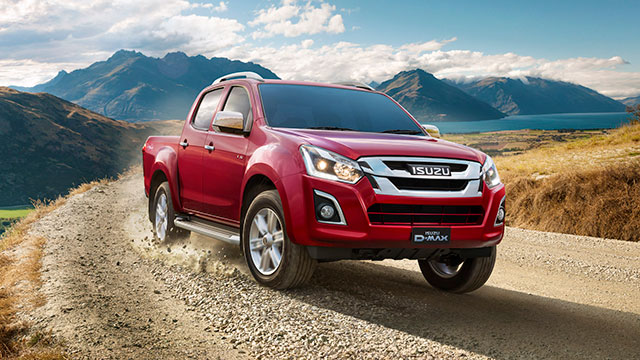 A 2018 update has softened the rugged Isuzu D-MAX… a little. While other brands steal the headlines, Isuzu has been one of the quiet achievers since returning to the Australian market in 2008.

Its super-simple offering of a D-MAX ute and MU-X SUV built on the same platform won over the no-frills off-roading crowd to the point where, in 2017, local dealers moved 17,717 units – outselling such ute stalwarts as the Nissan Navara, VW Amarok and Mazda BT-50.

The company has made some updates for 2018 and expanded its range with a flagship variant for the D-MAX and a 4x2 MU-X model. Prices for the D-MAX start at $28,500 for the 4x2 manual and top out at $54,700 for the 4x4 LS-T. To sum it up broadly, it represents a subtle shift away from Isuzu’s stubbornly utilitarian roots.

Underpinning this, literally, is a retooling of the suspension. In all up-spec crew cab models, five-leaf suspension has made way for three-leaf, which, along with progressive spring rates and larger rubber silencers, aims to improve ride comfort without sacrificing its ability to tow or carry a payload. The difference is slight but discernible, particularly over small bumps, and doesn’t affect composure when it’s hitched up or weighed down. A reversing camera and rear bumper are now standard across the range, and trailer sway control is standard except on the 4x2 manual cab chassis.

Like the suspension, the new D-MAX LS-T is something of a departure for Isuzu, which has never bothered to match its pricier competitors for comfort or interior style. Leather appointed seats make their D-MAX debut in the LS-T, alongside sat nav, 18-inch alloy wheels, climate control, roof rails and (on the 4x4 variant only) keyless entry and press-button ignition. Chrome and glossy black accents, in concert with soft-touch faux-leather surfaces, add a further sense of luxury.

Another concession to urbanisation are three new colour choices – Graphite Grey, Magnetic Red and Cobalt Blue – and Isuzu says it will consider a sports model if LS-T sales suggest there’s a market. Servicing intervals have been stretched to 12 months/15,000km (up from 10,000km) and capped price servicing is now five years or 75,000km.

For the ute enthusiast willing to shell out for the LS-T 4x4, it’s only a small step up to a 3.2-litre Ford Ranger or 3.0-litre VW Amarok, which are more powerful and feel more premium. So, while the 2018 D-MAX updates might not change minds among the ‘urban off-roader’ crowd, they’ll ensure Isuzu’s well-built workhorse continues to be the dark horse, too.

Want to keep your employees safe on the road?

NRMA specialises in helping your staff learn the skills they need