Those interested in a 4x4 dual cab ute shouldn't look past the Ford Ranger XLT, according to the judges of Australia's Best Cars 2018. The popular Ford model beat out the VW Amarok and Toyota HiLux to take the gong.

Australia's Best Cars puts popular makes and models through their paces in 15 different categories, ideally to give perspective buyers the best possible review before they choose one to purchase. Judges use three main criteria - value for money, design and function, and on the road - to inform their decisions.

Here's how the Ford Ranger took the top spot:

Currently Ford’s most popular model and one of the best sellers in this class, the Ranger has dominated Australia's Best Cars 4x4 dual cab ute category since its inclusion in the program in 2013. It has only lost its crown once when it fell to the eighth-generation Toyota HiLux in 2015.

With some updates since then, the Ranger has once again asserted itself, and was looking promising for a win in 2018 even before the Blue Oval offered a new five years/unlimited kilometre warranty for new vehicles delivered from May 1st. This was announced just as our test week for all the class finalists kicked off, making the Ranger almost untouchable.

The Ranger XLT and HiLux SR5 are the two dearest utes in our scoresheets. But the Ford's depreciation, running and repair costs, and insurance premiums, hover around the class averages. Standard equipment levels are good, and only the Holden Colorado LTZ offers more kit for slightly less money.

Towing ability and practical design are important in a ute, and the Ranger isn't found wanting. The XLT comes with a towbar and trailer sway control as standard, and it's rated to a best-in-class 3500kg maximum towing mass. A generously proportioned tray with standard tub-liner, six load restraint eyes, a power outlet, load area illumination, and a payload to deal with work or play, all rated well with our judges. Like the HiLux, the Ford has a 230-volt inverter power outlet in the cabin.

Comfortable seating in all positions and cabin space that's equal best in class help the Ranger's cause too. Inside and out, the Ranger rates highly for its build and finish quality, with a premium look that shows how far utes have progressed in recent years from their relatively spartan workhorse predecessors.

Performance from the Ranger's 147kW, 3.2-litre, five-cylinder turbo-diesel again impressed the judges, whether on-road or lugging its way through the bush. With a gutsy 470Nm delivered between 1750 and 2500rpm, it easily shrugged off the challenges of our off-road test loop, including hauling a 500kg payload and four burly ABC judges up a steep, muddy and badly rutted track. Off-road, the Ranger proved as accomplished and capable as the best the class can offer.

The big Ford's road manners are far more car-like and sophisticated than might be expected in a vehicle built primarily to work for a living and tackle tough off-road terrain. Steering, handling and ride are as good as it gets in the class.

The popularity of dual cab utes goes from strength to strength with Australian buyers. The Ford Ranger XLT exemplifies the versatility, driveability and relative civility that the modern dual cab ute can deliver. That's why it has again stamped its authority over a class it has virtually made its own. And you can expect the Ranger to be a force to be reckoned with in the future, too, with Ford announcing powerful new engines providing up to 500Nm, a 10-speed auto, advanced driver assistance features, and other improvements for 2019.

The VW Amarok has finished at the pointy end of Australia’s Best Cars dual cab 4x4 class in years past and, once again, has provided a worthy challenge to the highly successful Ford Ranger.

The Amarok’s opening gambit looks solid enough, with most value-for-money scores giving the Toyota and HiLux something to contend with. In TDI420 Core specification, it has a significant price advantage that also flows through to lower depreciation losses. Ongoing costs, such as running and repair, insurance, and fuel are marginally better too. But it falls short of the Ford’s better warranty and dealer spread, and its lower purchase price reflects a less generous standard features list.

The Amarok’s cargo tray is the largest in the pack, handily able to carry a standard Aussie pallet between the wheel arches. There’s also a tailgate load-rated to 200kg, and cargo area light. Maximum rated towing at 3000kg trails both the HiLux and Ranger.

The Amarok’s bi-turbo diesel is mated to an eight-speed auto and delivers surprising performance, but doesn’t quite match the grunt of its rivals’ larger displacement engines. The ute is capable off-road, but we found it more likely to have clearance issues over moguls and heavily rutted terrain.

It remains one of the more civilised and car-like offerings in this category.

With the VW Amarok once again in the mix alongside Ford Ranger, the HiLux SR5 - a class winner in 2015 - has been relegated to the third step of the podium.

Our judges found cabin space in the rear not quite as generous as the Ranger, but they liked the recent inclusion of rear console air vents, something missing from the Ford. Improving its ergonomic credentials are B-pillar grab handles for rear passengers, push-button start and proximity entry, and steering tilt and reach adjustment (tilt-only is the norm on most in the class).

The 2.8-litre turbo-diesel offers a respectable level of performance on- and off-road, and feels a little more refined than the Ford while doing it. As the numbers show, the HiLux is a capable vehicle in off-road terrain and easily handled our steep and muddy off-road test section, both unladen and with 500kg in the tray and four occupants on board.

With a maximum towing capacity of 3200kg when equipped with an auto transmission, the HiLux falls shy of the Ford’s 3500kg rating. But the ever-popular HiLux SR5 has much to recommend it and remains a great example of the 4WD dual cab genre.

Roadside assistance for all vehicle types

Keep your business moving with NRMA 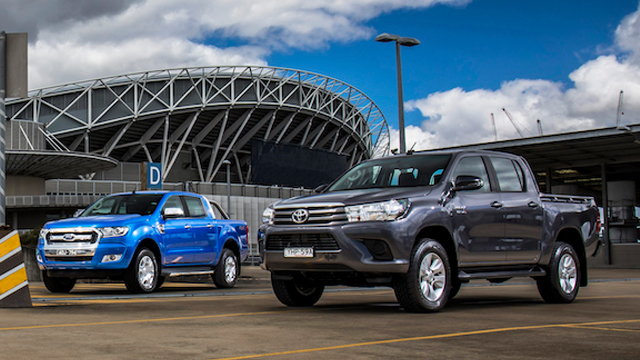