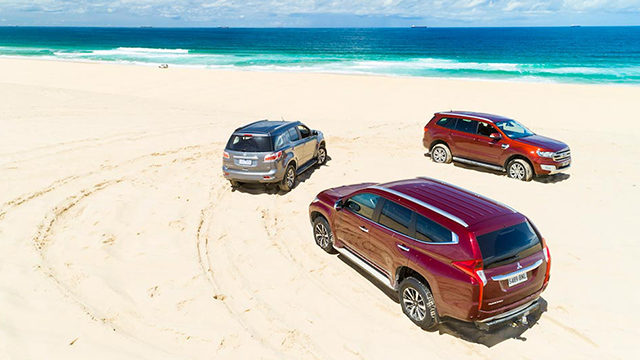 Before Australia’s love affair with the SUV took hold, most 4WD vehicles – such as the Mitsubishi Pajero and Toyota LandCruiser – had a strong separate chassis and dual range transmission. While their seven-seat configuration made them a great alternative to the traditional family wagon, the trend in SUVs has since been to become more car-like. However, the rising popularity of dual-cab 4WD utes as multi-task vehicles has now spawned a new wave of seven-seat wagons that are also genuine off-roaders. We tested three of the bestselling models side by side.

The Everest has big shoes to fill, as it’s the de facto replacement for the discontinued Ford Territory. Launched in 2004, the Territory was based on the Falcon wagon platform, whereas the Everest’s underpinnings come from the current Ford Ranger ute. There are three equipment levels: Ambiente, Trend and Titanium, with prices starting at $54,990 for the Ambiente. The Trend is available in rear-wheel-drive configuration for $55,990, but our 4WD test car costs $60,990. The Titanium rockets up to $76,990.

Powering the Everest is a 3.2-litre five-cylinder turbo-diesel engine developing 143kW and 470Nm (from a low 1750rpm). A six-speed auto gearbox is the only transmission option. Claimed combined fuel consumption is 8.5L/100km. Its off-road specifications are just as impressive, with 225mm of ground clearance, 800mm water wading depth, a dial-operated terrain management system and a 3000kg tow rating.

Melding rugged off-road credentials and day-to-day driving abilities is always a challenge and, in addition to traction control, dynamic stability control and roll stability control, Ford engineers have equipped the Everest with ‘curve control’ technology to improve its handling through the bends.

Climb up into the interior and you’ll see a functional, understated interior finished mainly in grey and satin silver. In the centre is Ford’s voice-controlled SYNC 3 infotainment system with six-inch screen. While some traditional controls are not easy to find and identify, a quick session with the SYNC 3 system enables you to set temperature, audio and phone preferences, and a recent system upgrade means it’s better attuned to the Aussie twang. Comfort has long been a Ford strong point (at least in Australian designed and built models) and for the driver and second row passengers the Everest continues this trait with soft yet supportive seats. The third row is a different matter – getting into them requires some dexterity and they’re only suited to children. All three rows have ventilation outlets and the Everest has separate air con controls in the middle row. The large rear door is the only electrically operated one in our test, which is a desirable feature given its size.

Although the heaviest of the three vehicles, the Everest has a real spring in its step and performance from the five-cylinder diesel is class leading. Off the mark, the Everest speeds up quickly using minimal revs, and it’s a toss up between the Everest and Trailblazer for the quietest cabin. Overtaking is a breeze and, although we didn’t carry out a tow test with these three, our sister publication Australian Caravan+RV recently hitched up a 2500kg caravan to the Everest and that did little to dampen the torquey engine’s ability. The only discernible difference was more frequent use of the engine’s rev range and a rise in cabin noise.

We drove all three 4WDs on a stretch of the quicksand-like Nine Mile Beach near Newcastle. We dropped the tyre pressures to suit the conditions and the Everest looked to be the least distressed in the hands of our resident off-road tester, tackling the dunes and berms more easily. On the run back from the Central Coast aft our off-road excursion, the Everest recorded a very respectable 7.5L/100km. 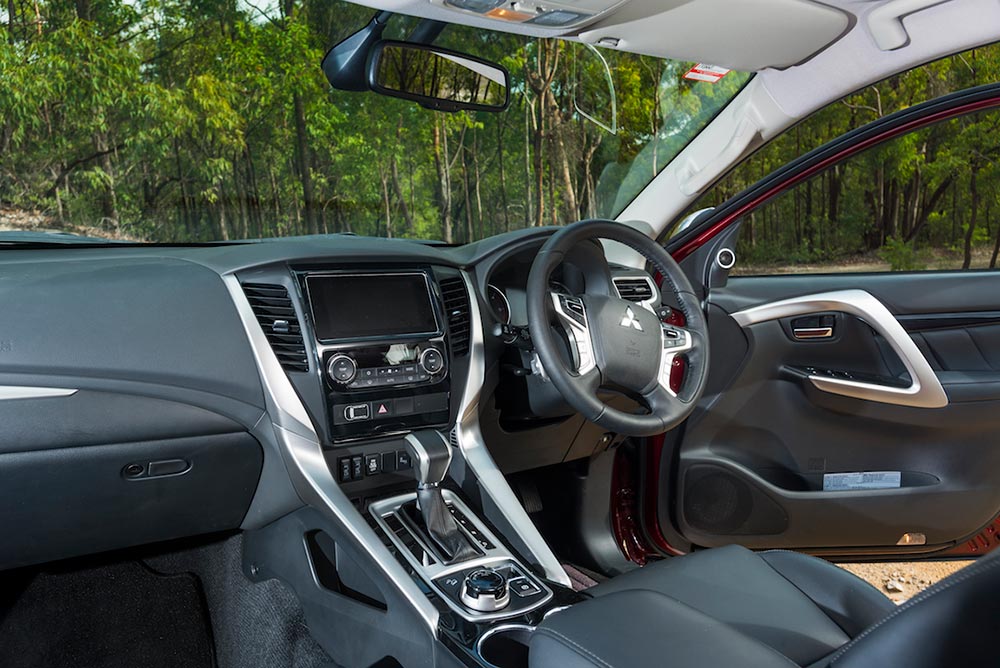 The Pajero has the classiest interior. 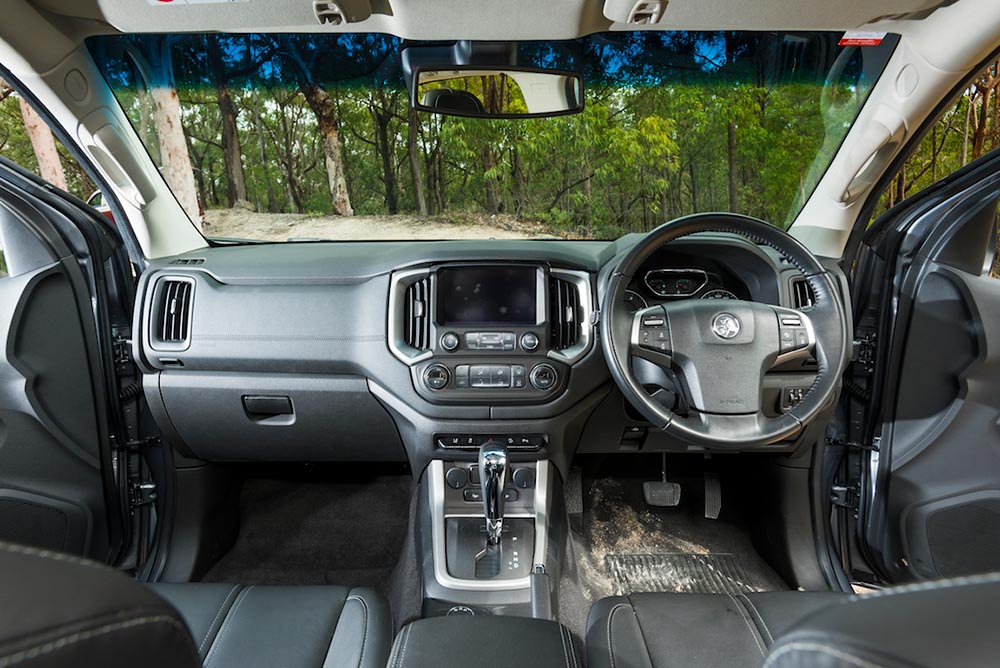 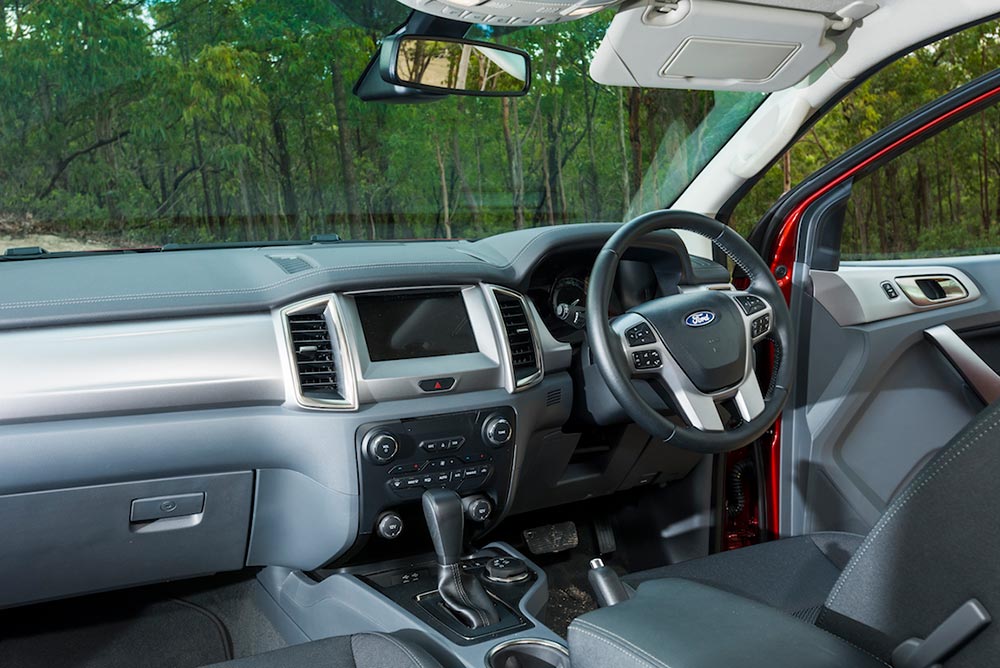 Inside, the Everest is understated and functional. 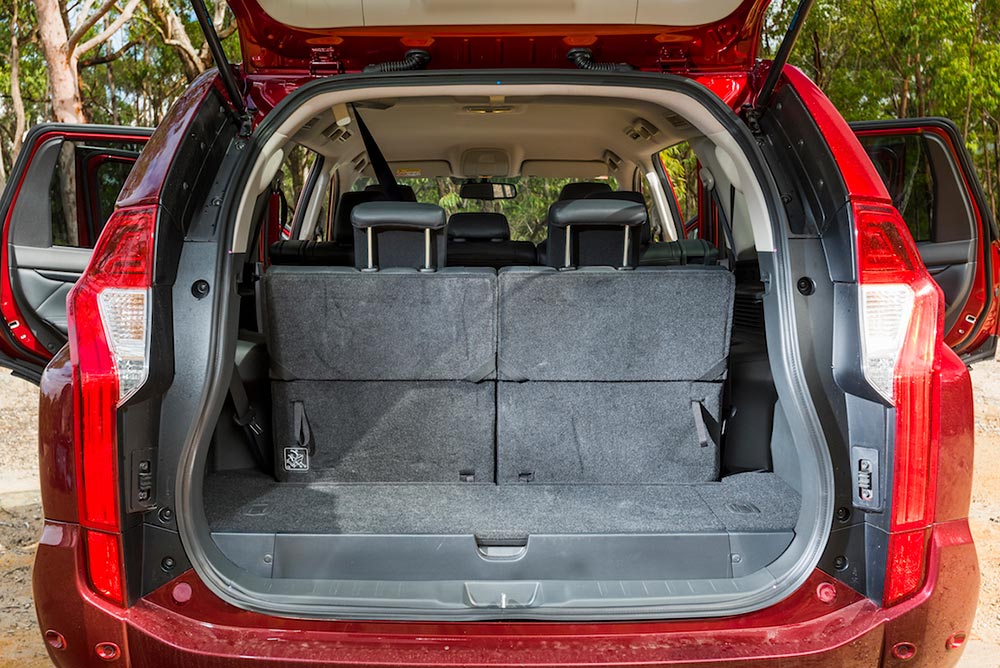 The Pajero Sport has the smallest boot. 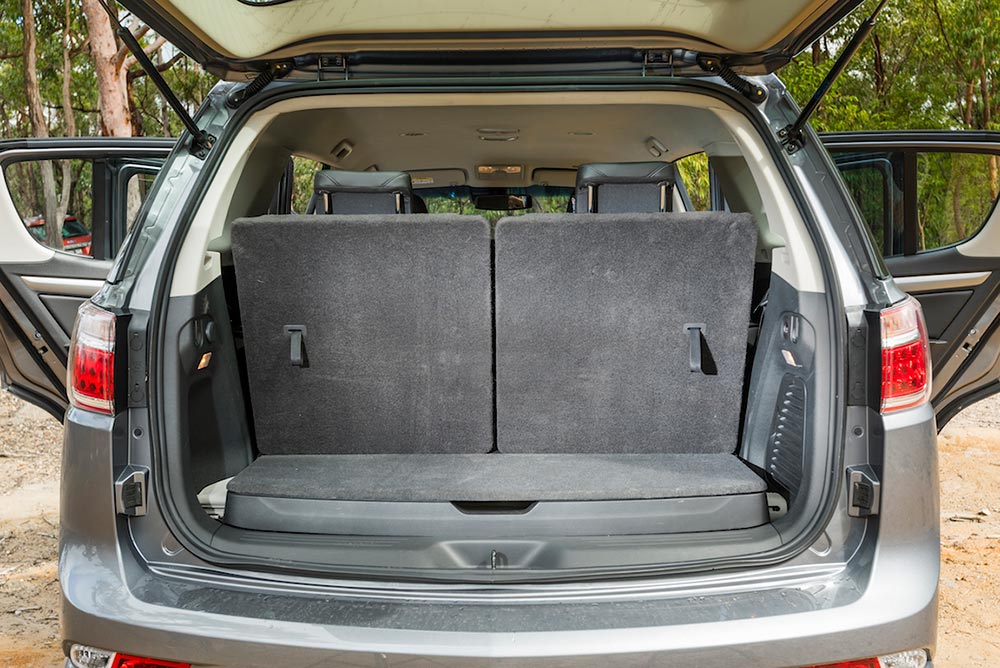 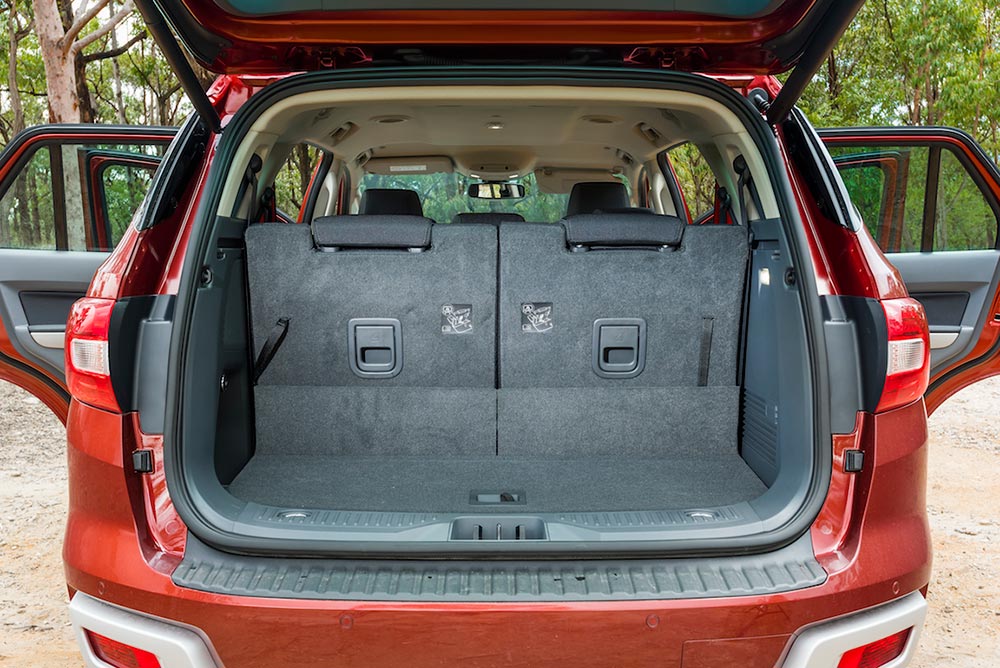 This is not an all-new model, but rather a rework of the old Colorado7, whose owners will pick the LED daytime running lights and redesigned front facia and bonnet as the main changes to the exterior. No shrinking violet, the Trailblazer mirrors the Everest in almost every dimension while being 40mm wider.

Holden’s highly regarded local engineers have tweaked the chassis and suspension to better suit Australian conditions, and the Trailblazer features a revised power steering system that provides a sharper response and fewer turns lock to lock. All the major rubber engine mounts have been revised to improve smoothness and quietness.

Powering the Trailblazer is a 2.8-litre turbo four-cylinder diesel engine, developing 143kW and 500Nm. Maximum torque is available from 2000–2200rpm and, like the Everest, it has a six-speed auto. Claimed fuel consumption is 8.6L/100km. The 4WD system features shift-on-the-move operation with hill descent control, hill start assistance, and a limited slip rear differential. 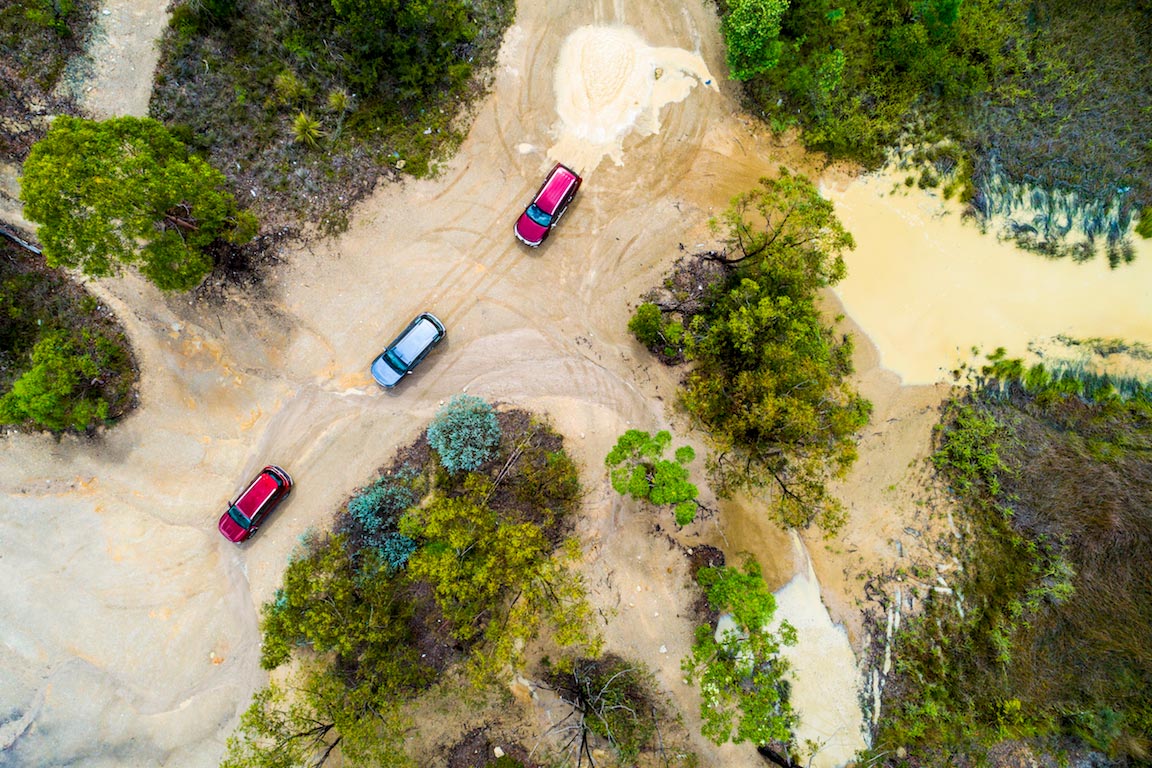 Two models are available, the LT ($47,990) and LTZ we tested, which at $52,490 is $8500 cheaper than the Everest Trend. But the standard features – such as 18-inch alloys, an eight-inch colour touchscreen with sat nav and voice recognition, and leather appointed and heated seats – don’t reflect the cheaper pricing. In addition, safety tech like forward collision alert, side blind zone alert and rear cross traffic alert all help it achieve a five-star ANCAP rating.

The Trailblazer’s interior has been freshened up, but in this company it’s found wanting. Plastics look cheaper and the silver highlights around the air vents and centre console do little to improve the interior ambience. Holden’s MyLink infotainment system doesn’t have the functionality of Ford’s SYNC 3 system – you can’t adjust the air con settings, for example – but it’s easy to pair your phone or use the sat nav, and apps like Pandora, Stitcher and Siri Eyes aid functionality.

There’s plenty of interior space for all occupants, though, and access into the third row is better than in the Everest. Adults could survive a short trip in the third row, too, which is something one would choose to do only in the most desperate of circumstances in the Everest. The Trailblazer’s seat comfort is a sore point, however – they’re hard and you sit on them rather than in them, meaning they’re not ideal for longer trips. That said, all three rows have ventilation outlets and cup holders.

There’s little that separates the pair in performance, although throttle response from the Everest’s larger engine edged it ahead of the Trailblazer on regular roads. Off-road they’re both torque monsters and tackled the rough stuff with ease. On sand the Trailblazer powered along without resorting to using too many engine revs, and even when my inexperience in these conditions got the Trailblazer bogged, it extricated itself from the sand when the tyres were further deflated.

The changes to the steering have tightened up the whole package and the Trailblazer now feels more comfortable and composed over winding sections of road. On the return leg back to Sydney, the Trailblazer recorded a frugal 6.4L/100km. 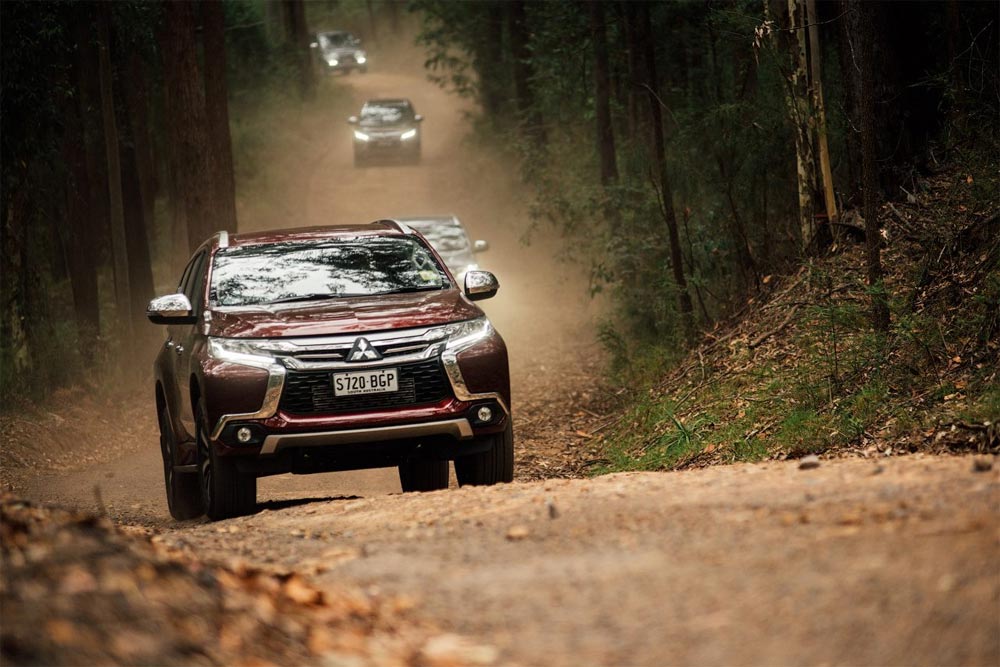 The Pajero Sport comes hot on the heels of the new Triton range with which it shares much of its mechanical architecture. It’s also a replacement for the Mitsubishi Challenger and three models are available: GLX, GLS and Exceed, with prices starting from just $45,000 for the five-seat GLX. The mid spec GLS is $48,500 and the Exceed we tested is $52,750.

Mitsubishi’s competitive pricing hasn’t short-changed buyers when it comes to standard features and the Exceed has an electric handbrake (not found on the Trailblazer or Everest), dual-zone air conditioning, button start, leather trim, rain-sensing wipers, dusk-sensing headlamps and a rear diff lock. The Exceed also has an advanced suite of safety features, offering blind spot warning and forward collision mitigation, which are both found in the Trailblazer LTZ and the Everest Trend. In all three cases, the lower spec models miss out on these safety features.

Under the Pajero’s bonnet is a 2.4-litre turbo-diesel four-cylinder engine developing 133kW and 430Nm (from 2500rpm). Unlike the Triton, which uses a five-speed automatic, the Pajero Sport uses Mitsubishi’s new eight-speed auto transmission and has a claimed fuel consumption of 8.0L/100km.

The Pajero Sport has the smallest engine of the trio and it’s the lightest vehicle, weighing just over two tonnes, yet it has the best tow rating at 3100kg. It’s also the smallest vehicle dimensionally and sits on the shortest wheelbase. The upside of this is it has the best turning circle (11.2 metres), which is a real plus in tight situations. Ground clearance is 218mm and it splits the Trailblazer and Everest with a 700mm wading depth.

The interior treatment in the Pajero Sport is top class and the detailing and finish are a notch above the Trailblazer’s and arguably better than the Everest’s as well. The high cockpit-style centre console, which divides the front into two ‘pods’, was a highlight for me, along with the well-bolstered seats and sporty leather-wrapped steering wheel. However, some in the team felt the high console restricted leg room when you wanted to spread out. The only real downside inside is Mitsubishi’s multi-info display for which some voice activated commands just don’t work and overall its functionality is weaker.

While the cabin feels like it’s on the cosy side, the tape measure tells a slightly different story. Front and rear leg room is close in all three, and width across the rear seat in the Pajero Sport is only 30mm less than the widest that was in the Trailblazer. Front head room is similar in all three and it’s only in the Pajero’s second row where it loses 40mm to its rivals. Luggage depth with the third row seats in place is the same in all three vehicles. It loses 80mm of load length when the second row seats are folded and is also 80mm narrower between the wheel arches.

Access into the third row is on par with the Trailblazer and an adult should be able to manage a short stint in its seats. The third row seat belt has a mounting point in the roof rather than in the seats, though, which means clumsy ergonomics. 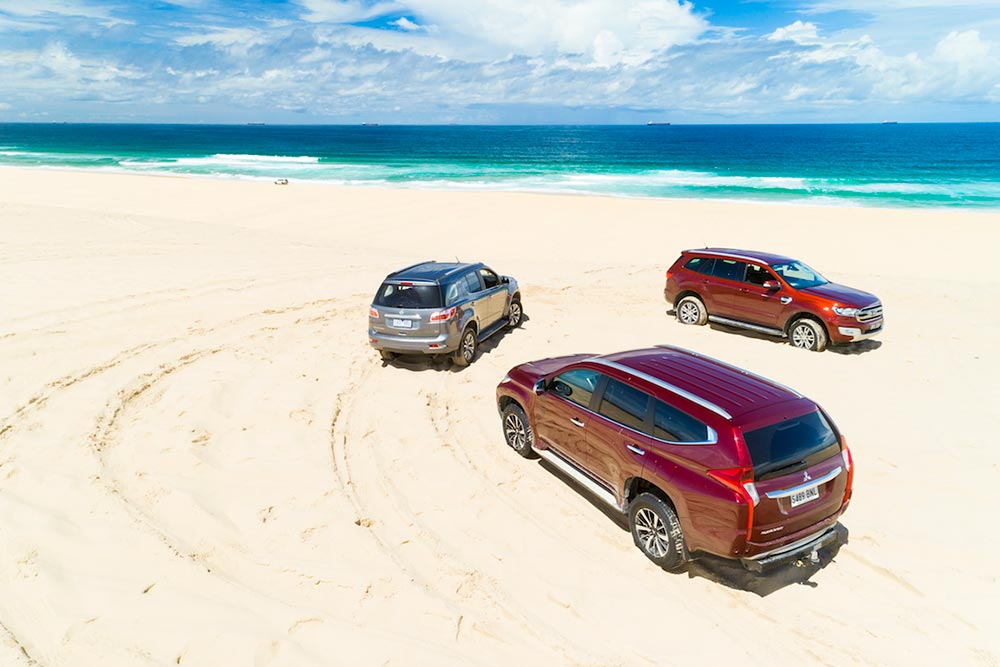 The 2.4-litre engine has to work a little harder to earn its keep in this company, but the new eight-speed auto does a great job in keeping it in its torque sweet spot, minimising big rpm swings. The handling package feels good on the bitumen and ride quality is on par with the other two. A recent review in Australian Caravan+RV found the Pajero Sport a capable tow vehicle and it confirmed its versatility with a competent display of driving on Nine Mile Beach. Fuel consumption on the return leg of our test revealed it to be the thirstiest of the three, returning 8.8L/100km.

This trio’s 4WD ute origins mean they have exemplary off-road abilities but are less comfortable in the daily commute than urban SUVs. While multi-purpose vehicles are always going to have compromises, each of these is an ideal choice for outdoor driving adventures with the family while towing a large boat or caravan. The Trailblazer could use more class in the interior and the Pajero is comparatively tight on space. The end result sees the Everest as the best at balancing all the competing requirements of a family-friendly 4WD, but it comes with a premium price tag.