You really need to be ticking all the boxes to win what is one of the fastest-growing categories in Australian new vehicles sales. Major manufacturers have thrown their best into the ring for a crack at this year's title, and it is a quality field. So all credit to Land Rover Discovery Sport for taking it out.

The Disco Sport received a new power-plant in 2016, with the 2.2-litre turbo-diesel replaced by a 2.0-litre engine which delivers identical power of 110kW. It does drop 40Nm of torque although the output is still a healthy 380Nm from 1750rpm. The positives of the new power unit are the virtual elimination of turbo lag, considerably improved fuel economy – a meagre 5.3L/100km on the official combined test cycle – and significant noise, vibration and harshness refinements – the latter was an Achilles heel of the old engine. While the Disco Sport gives away almost 40kW and 60Nm to both Kia Sorento and Hyundai Santa Fe, a combination of a lighter kerb weight and a slick-shifting nine-speed auto mean the power numbers don't tell the whole story.

On the road the Disco Sport puts daylight between itself and its rival. It has more communicative steering, less body roll and a firmer but compliant ride that's able to absorb significant potholes while handling gravel corrugations without complaint.

As you'd expect with any vehicle carrying the Land Rover emblem, Discovery Sport's off-road performance was well above anything the other finalists could produce. It has better approach and departure angles, greater wheel articulation and a switchable all-terrain system which allows the driver to choose from grass/gravel/snow, mud-ruts and sand settings. Add to that roll-over stability and hill descent control and you have probably more capability that any of the other vehicles here are likely to see.

As well-appointed as the Kia and Hyundai finalists are, there was an extra feeling of luxury in the Land Rover. With a combination of the leather trim on the eight-way electrically adjustable front seats, the soft-touch and brushed aluminium finishes across the cabin, the slick-looking pop-up gear-shift controller and an eight-inch colour touch-screen display, the Disco Sport appeared less cluttered and felt more contemporary. Its smaller physical dimensions mean passengers, particularly in the rear seats, have a little less space in terms of leg and shoulder room, however the 60/40-split rear seat slides up to 160mm and you're able to recline the backrest.

The Koreans do better for warranty, however the Disco Sport stands up well in terms of future value. 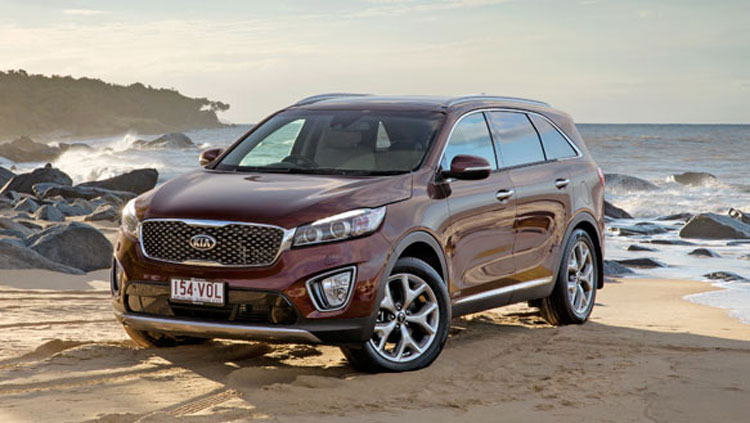 Kia Sorento may well have retained the trophy it won for this class last year but for a new engine in the Discovery Sport; it was that close.

It's difficult to fault Sorento. It has class-leading safety, loads of space for up to seven, a premium if not luxurious interior, well-sorted ergonomics and strong on-road performance. At cruising speeds occupants are treated to an extremely quiet cockpit although there is a level of engine intrusion when scooting about the suburbs at lower speeds.

Kia undertakes a localised suspension program for most of its vehicles on the Australian market. On Sorento the results are impressive in terms of ride quality, however the sheer bulk of the vehicle does challenge steering feel and control on more challenging sections of the road. But as an urban and highway cruiser it's very hard to fault. 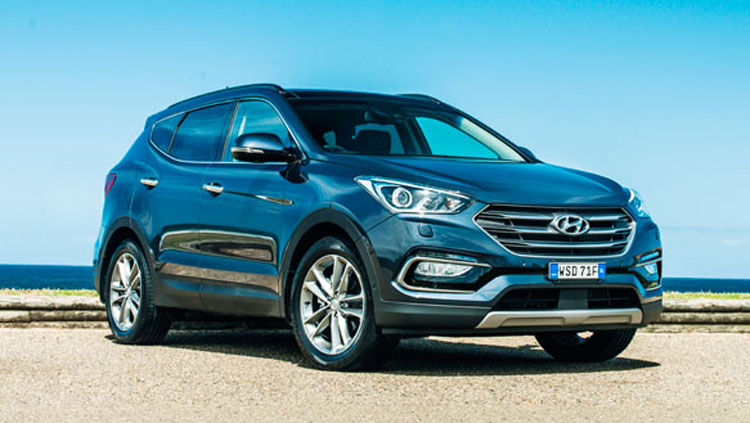 It's hard not to draw comparisons between Santa Fe and Kia Sorento as they share so much, but the Hyundai version has some unique styling, features and characteristics to sway more than a few buyers its way.

Santa Fe scores an advanced self-parking system and a larger eight-inch infotainment screen offering increased visibility for the reversing camera, while for those off-road activities hill-descent control is included.

Santa Fe and Sorento share a engine/ transmission combination with the turbo-diesel putting out 147kW and a healthy 441Nm of torque and matched to a six-speed auto. It delivers only average fuel consumption of 7.8L/100km on the official test cycle.

Santa Fe tends to be a little less refined than Sorento, with greater engine and road noise intrusion in the cabin around town and on the highways. Similar to Kia, Hyundai has a locally based suspension development team to refine Santa Fe for Australian conditions, which in this case has produced a good result with more steering feel and less body roll.

Santa Fe and Sorento share a maximum tow rating of 2000kg which is 500kg less than the category winning Discovery Sport. This is further restricted by a maximum 100kg ball load which means you are unlikely to be able to get the full 2000kg capacity.

Need to finance your new car?