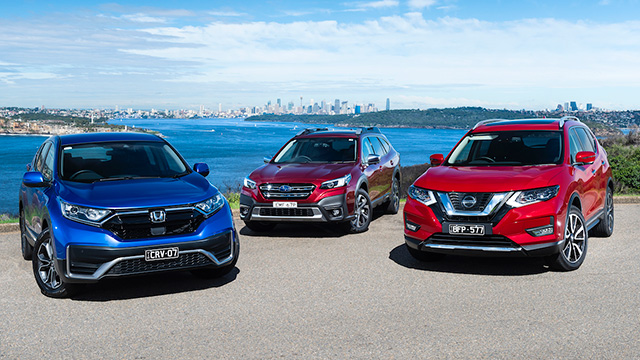 The Honda CR-V, Nissan X-Trail and Subaru Outback have been consistent sellers for more than 20 years and still have plenty to offer mid-sized SUV buyers

What you’re looking at are three descendants of the SUV progenitors that reshaped the Australian car market.

The Subaru Outback (pictured centre above), Honda CR-V (left) and Nissan X-Trail (right) debuted in 1994, 1995 and 2000 respectively and became mainstays of the ‘crossover’ category that, in Australia at least, all but led to the demise of the large sedan and wagon.

The CR-V and X-Trail have recently been treated to minor upgrades, while 2021 ushered in the first all-new Outback in over a decade. We put this trio of old dogs side by side to see what new tricks they have to offer in the ever-expanding medium SUV market.

Launched in 2009, the fifth-generation Subaru Outback was wider and taller than its predecessor and soon established itself as the best touring car in Australia.

What few issues it did have (sub-par sat-nav and body roll) were gradually addressed in subsequent updates and, even with the huge expansion of the SUV market, the Outback continued to prove a winning formula, especially for our country’s unpredictable road conditions.

When a manufacturer gets it so right the first time, however, releasing a new model can be tricky. Subaru’s solution for this sixth-generation Outback has been to consolidate its engine line-up and focus on improving a few key areas.

Both the 2.0-litre turbo-diesel and 3.6-litre petrol V6 engines have been deleted from the range, leaving the 2.5-litre direct-injection four-cylinder and CVT combo the only option. Prices start at $39,990 for the AWD and top out at $47,790 for the Touring (our test vehicle).

The Outback’s cabin is more spacious than ever but there are no great design surprises, save for the iPad-sized infotainment screen. Visually pleasing graphics and large icons make switching between main menus easy enough, but it’s indicative of the new Outback’s general sense of tech overkill.

Switching to recirculated air con, for example, now requires two taps on the screen instead of pressing a button. Also, the digital indicator is less convenient than an analogue one, the DAB radio display doesn’t show which song is playing, the lane keeping assistance is unnecessarily intrusive, and the speed camera alert is deafening.

Gadgets and gizmos should make driving easier or more pleasurable, and too many on the Outback add stress rather than alleviating it. The CR-V and X-Trail also have loads of active driver aids but they subtly help out in the background.

However, when it comes to the holy trinity of comfort – seats, ride quality and insulation against noise and vibration – it’s still daylight between the Outback and almost everything else in its class.

Bumps and corrugations might as well not exist, thickened windscreen glass makes a quiet cabin quieter still, and the Outback’s soft-roading credentials are irrefutable, with plenty of ground clearance and Subaru’s X-Mode system that optimises throttle response and power distribution for dirt, snow and mud.

In its fifth iteration the Outback became a properly big vehicle, but the sixth-generation rides on Subaru’s new global platform and is even longer and wider. This is evident in the generous foot and leg room for all occupants and a staggering 1090mm x 1090mm of luggage space. The penalty for sumptuous interior space is a shortfall in manoeuvrability.

At 4870mm, the Outback is nearly a foot longer than the Honda and it can feel like more when attempting a tight turn in a carpark. The new platform also improves torsional rigidity and provides a lower centre of gravity, dispensing with the body roll inclinations of yesteryear Outbacks and putting it on par with the modern crop of SUVs.

On launch Subaru claimed the Outback’s 2.5-litre engine was “90 per cent new” and it’s easily the smoothest and most refined powertrain in this comparison. Minor power and torque increases make it, on paper at least, the standout for performance. But in day-to-day driving it simply doesn’t deliver the goods; the CVT is too eager to keep the engine at low revs and, while it’s responsive from a standing start, afterwards there’s no pickup unless you really prod the accelerator – hardly conducive to relaxed driving.

Perhaps the goal is lower fuel consumption, but even with an engine stop/start system the Outback returned 7.5L/100km on our drive loop – 0.1L worse than the aging X-Trail. Though thirsty, Subaru’s 3.6-litre V6 was far better suited to hauling around the Outback’s 1700kg kerb weight. Cladded wheel arches, dazzling gizmos and “improved structural parts” can’t hide the elephant in the room: under the bonnet, this Outback is an update at best.

Never the glamour-puss of the mid-sized SUV segment, the Honda CR-V has nonetheless forged itself a loyal following thanks to its competent driving dynamics and innovative design ideas. Late last year Honda reinvigorated the CR-V, updating the styling and making its ‘Honda Sensing’ safety package and 1.5-litre turbocharged engine standard on all models except the base Vi.

The revised model grades now include two seven-seat variants and five five-seat variants, all kitted out with various trims and features. Our test vehicle, the VTi-L AWD, is priced at $40,490 and comes standard with 18-inch alloy wheels, an eight-inch touchscreen, dual-zone climate control, leather appointed seats, front-seat heaters, and a hands-free powered tailgate. While digital radio is still not common in base model mid-sized SUVs, its absence on the second-highest CR-V model grade is disappointing.

Matched to a CVT, the 1.5-litre engine puts out 140kW and 240Nm. The drivetrain is somewhat noisier than the Outback’s, but it’s more responsive in traffic and, overall, its noise and vibration levels are still very good. The CR-V’s steering is also sharper than both the Outback’s and the X-Trail’s and its ride comfort lands somewhere in between.

For everyday suburban duties it’s the most competent and capable, even if it can’t match the other two for off-road credentials. It was also the most economical by far on test, returning 6.6L/100km – nearly a litre better than the Outback.

Interior styling continues to be a weak area for the CR-V and it’s unquestionably the ugly duckling here. The gear lever especially looks dated and plasticky, although its clever positioning means it doesn’t fight for space with the drink holders or storage tray. The leather steering wheel is a pleasant surprise, easily the most tactile of the three.

Under the tape measure the CR-V gives up a bit of width between the wheel arches compared to its rivals, but its boot aperture is a full 10cm taller than the Outback’s and 4cm taller than the X-Trail’s, which can make a huge difference if the payload is a chest of drawers or the like. There’s still room for a full-sized spare wheel beneath the floor, too, providing peace of mind for country driving.

The second-row doors open to a right-angle aperture, providing a few extra inches of access that often prove critical when getting toddlers in and out. However, the rear floor sits quite high and the back seats are comparatively flat, making the CR-V the least suited to long trips.

Some purists thought Nissan had lost the plot when it introduced a curvier X-Trail in 2014, but it has since proved a masterstroke. Already popular in its squarer form, the X-Trail has remained among the top-selling vehicles in its segment thanks to a compelling combination of space, comfort, practicality, performance and reasonable pricing.

This 2021 refresh is the last hurrah for the current X-Trail, which is set to be replaced (along with the Qashqai and Pathfinder) in 2022. Not a lot has changed and nor did it need to, with the X-Trail’s styling and ergonomics good from the get-go. In fact, the top-spec Ti (our test vehicle) remains largely unchanged, bar some electronic goodies such as a seven-inch touchscreen and Apple CarPlay and Android Auto connectivity trickling down into the cheaper models. ‘Intelligent driver alert’, essentially a driver fatigue monitoring system, has been added to the Ti’s already extensive suite of active safety equipment.

Subaru and Honda are known for their precise engineering and refinement, so Nissan’s drivetrain – which is noisy and prone to vibration at idle – seems slightly archaic in this company.

The 2.5-litre engine/CVT combo does the job, though, and the X-Trail is still right at the head of the performance pack.It combines the responsiveness of natural aspiration with fuel consumption not far behind its turbocharged rivals, especially on the highway, and it returned 7.4L/100km in our real-world test. For handling it’s more or less even with the Outback, although the X-Trail’s ride is considerably more jittery.

If you’re planning to hit the rough stuff it’s a toss-up between the Outback and the X-Trail. The X-Trail has to make do with a space-saver spare but is equipped with a locking differential; the Outback misses out on a diff lock but has better wheel articulation and a full-size spare.

What has endeared the X-Trail to so many families is its versatility and, even seven years after its initial launch, the design remains a winner. It’s the only vehicle in this comparison with sliding rear seats, so it can provide cargo space to rival the Outback if the occupants don’t mind squishing up. The Ti also offers the option of turning off the powered tailgate, but you still have to fight resistance from the electric motors, meaning opening and closing the door isn’t any quicker.

Of the three, the X-Trail has the most comfortable seats with the supplest leather – and the Outback and CR-V are far from uncomfortable. This is 2021, however, and negotiating long stretches of highway often involves technology, so the X-Trail’s single USB port in the front and rear (when the others have two) seems slightly deficient.

This is a curious comparison in that there’s no clear winner.

The Subaru Outback has the edge in ride comfort and refinement but loses out in performance. The Honda CR-V is cheaper, with superior overall driving dynamics and fuel consumption, but its interior presentation and the absence of digital radio are definite body blows.

The Nissan X-Trail remains a good all-rounder and has the best seats for a long haul, but some technological appointments are showing their age and it can’t match the others for noise and vibration mitigation.

Criticisms notwithstanding, all three are perennial family favourites for good reason and serve as a reminder just how spoiled for choice modern SUV buyers have become.

Thinking of getting into one of these SUVs? 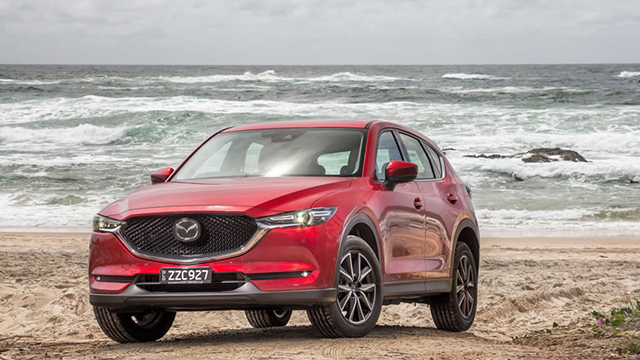 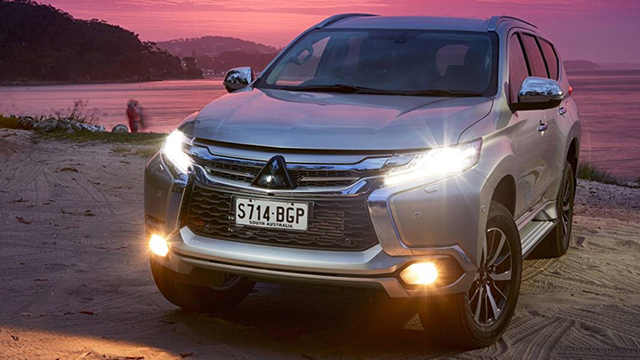 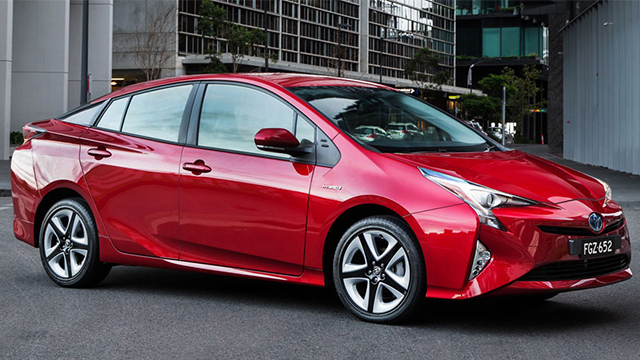