Kia's all-new high-riding Sorento seven-seat wagon has stepped up in quality, design and ability, and has ticked the right boxes to be appealing to family buyers, who are blessed with a lot of choice in this class. Although all offerings are 2WD wagons with seating for seven or more, there are petrol and diesel cars, and their origins range from converted commercial vans to SUVs and vehicles designed specifically as people movers.

Many of them excel in specific areas but fall short in others. Sorento manages to blend the things people love about a large, high-riding SUV with the functionality and versatility of a traditional people mover. They get that commanding SUV-style view, while the straightforward controls and a versatile cabin make it user-friendly throughout.

Sorento delivers good value for money across almost all purchasing and ownership aspects. Kia's outstanding seven-year/unlimited-km warranty and low servicing and repair costs with seven years' capped-price servicing provides extra peace of mind. It's also one of the cheaper vehicles in the class to insure.

For a mid-spec version, the SLi is well equipped, both in creature comforts and safety features.

Sorento drives well, with the 3.3L V6 petrol engine producing a healthy 199kW of power and peak torque of 318Nm. Coupled with a smooth-changing 6spd automatic, it provides plenty of performance when needed. The strength of this performance is a real plus, particularly when the vehicle is fully loaded, however it does mean higher than average fuel consumption.

The new model's longer wheelbase delivers more legroom. Comfort and space in the front and second-row seats, although not class leading, are very good. In the third row there are a few compromises, particularly access, but it's still better than many of the others. As with most vehicles in this class, there is not a lot of luggage space when all seats are up. Yet folding down the third-row seats to create a useful cargo space could not be easier. 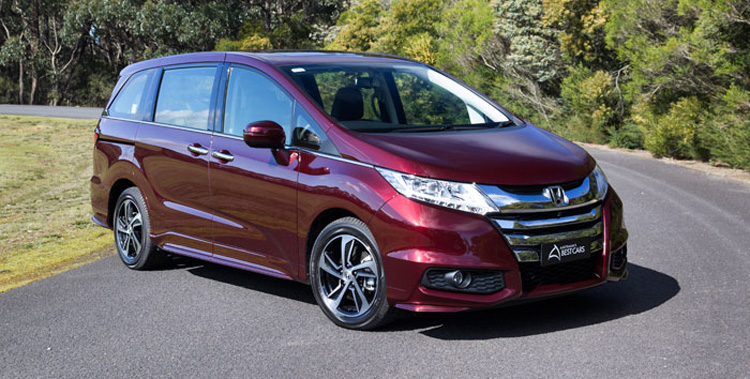 Honda Odyssey VTi-L's greatest appeal is its ability to accommodate up to seven people with an almost regal level of comfort in the second-row. Odyssey was designed as a people mover, and so it looks, feels and drives like a car-based station wagon.

The cabin is thoughtfully laid out, from the clear, logically placed driver controls to easy access for all seating positions and the ability to have adults in the rear two seats; in most of the other cars it's purely the domain of small children.

The top-spec VTi-L, which is a little more popular with buyers than the slightly cheaper eight-seat VTi, has class-leading standard equipment, excellent build quality and five-star ANCAP safety. Yet it doesn't quite match our winner, KIA Sorento SLi, in some of the important ownership aspects. Honda has just a basic three-year/unlimited-km warranty, and both insurance and running/repair costs, although still quite good, are a little more expensive than the Sorento.

The petrol engine does a respectable job as a daily drive but stronger performance would be handy, because the engine and transmission work hard when the vehicle is loaded. Likewise the ride is comfortable cruising on good roads but falls away on rough surfaces.

Kia Carnival has come a long way since its first commercial van-style generation. The 2015 model may still look van-like but it is now a purpose-built people mover designed specifically to carry up to eight in relative comfort. With almost car-like driving characteristics, it delivers a level of quality and refinement that early Carnival owners missed.

Being an eight-seater, Carnival's third-row seat comfort and overall space are top-notch. And even when fully loaded, there is still room for some luggage, unlike many of the SUV-style wagons. While not perfect in design, the seat folding provides plenty of versatility, and there's the bonus of a power-operated tailgate and sliding rear doors.

Kia's 2.2L diesel isn't the fastest in the class but its broad spread of strong mid-range torque together with a smooth-changing 6-spd automatic deliver good performance where it is needed, for everyday driving, and with respectable fuel consumption. For a large van it handles surprisingly well.

Carnival can't match the other two finalists on safety. The petrol model has a disappointing four-star ANCAP rating but the diesel version is unrated.